A petition has been launched calling for an independent review of the Upper Hunter Shire Council’s business case underpinning the proposed airport development, to be lodged with the New South Wales State Parliament.

The concerned residents said they were supportive of the airport redevelopment and warbird museum, but wanted an independent thorough assessment to ensure the largest capital expenditure ever undertaken by the Shire was realistic and would not leave ratepayers repaying a $10.8 million loan if projections are realised.

UPDATE: On April 28 the Upper Hunter Shire Council passed a motion for there to be an independent review of the business plan for the Scone Airport Development: Airport Project to be Independently Reviewed.

See details for the petition below.

Pat Gleeson said he supports development in the town, but wants to make sure it is realistic and urges residents to sign the petition. 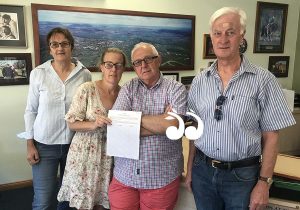 “I’m for all sorts of development in this little town, but we have to show due diligence in justifying a loan of approximately $10million to build the infrastructure they wish to build out at the airport,” said Mr Gleeson.

“We live in a democratic country and hopefully a democratic Shire and it’s up to the individual ratepayers if they sign the petition, we as a group and as ratepayers are concerned that the expenditure they are talking about and the business model doesn’t stack up,” he said.

“All concerned rate payers, I suggest they sign the petition they are there have a read of them and let’s try and get this independent review before they hook into it,” Pat Gleeson said.

Mary Jane Blake said she is concerned the project could result in a rate rise for residents.

“This is the ratepayers biggest investment ever,” said Ms Blake.

“This is huge and at the end of the day we don’t want to be left with a white elephant,” agreed Mary Jane.

“We can’t trust the Council to do anything, so we need to go above and beyond for some real facts on this,” she said.

“We’re talking about $10million, it’s not a little sum of money and I hope it is successful, but if it’s not who’s going to pay for it?”

“If it doesn’t work they could turn around and say ‘we’re going to put your rates up'”, said Mary Jane Blake.

Geoff Pinfold, who owns hangers at the airport said he wants to be clear they are not against airport upgrades or the warbird museum, but the underlying assumptions for such a huge spend needs to be tested properly.

“Council has refused to do an independent review when the motion was put up, so this is why we will call on the state government,” said Mr Pinfold.

“Council keep saying people have had years to raise concerns, but the 20th of September was their first public meeting,” he said.

“Somebody needs to break this down into all the components and look at what return does this give the ratepayers,” said Geoff Pinfold.

To be acceptable as a petition to state parliament, the petition needs to be signed and can not be submitted online. Copies of the petition will be circulated to other towns in the Shire and organisers welcome residents and businesses to contact them if they would like a copy. We will update the list of places where the petition is available below.

The petition is currently available at: