While Aboriginal people have lived in the area for thousands of years and today still have a strong presence in Muswellbrook and Singleton, what is known of their history in the Scone area is limited. This may be because the local Aboriginal population was relatively small, as indicated by the first written records of the area, or due to limited archaeological work in the area.

At the time of white settlement in 1827, the two tribes in the Scone district were the Tullong and Murrain1,  which were part of the Geawegal clan2. To the west near Merriwa and over the Liverpool Ranges is Kamilaroi country and south of the Scone area is Wonnarua country. Some sources claim the Gaewegal clan was part of the Wonnarua, while others indicate they were part of the Kamilaroi nation3. 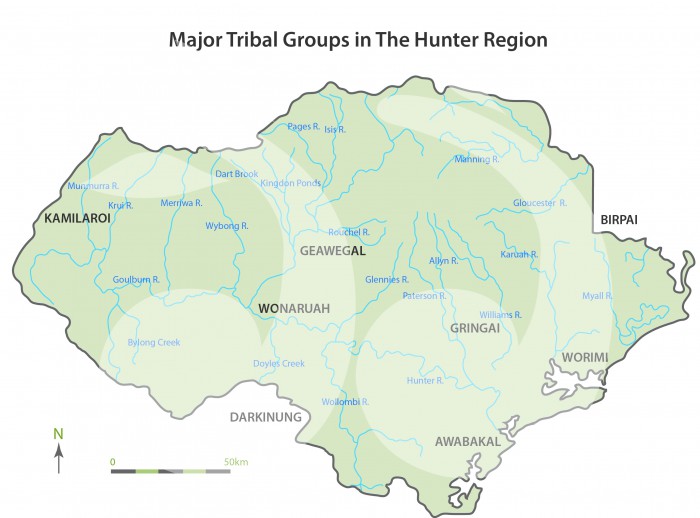 The first written historical records of the area indicate there was only a small population of Aboriginals at the time of white settlement.

On October 10, 1824 Henry Dangar, government surveyor, was visited by a tribe of 15 Aboriginals when he was camping at Dartbrook:

“….they appear’d to have great confidence in us by not evincing any fear as the (sic) approach’d us. Should conceive they have had no communication with White People – as everything shew them causes them to make gestures and evince much surprise…kept watch all night. Saw the native fires 8 or 10 in number at 1/2 mile dist.” 5

When Dangar and his party were just beyond the Liverpool Range, they were attacked by 150 Aboriginals and were forced to retreat.

The first white settler in the Scone area was Francis Little, who established the property Invermien in 1825. On June 5, 1828, Francis wrote a letter to the Governor’s Colonial Secretary, Alexander Macleay, which provides the earliest local records of the Aboriginal population:

“There are two Tribes or Families who inhabit this district – the Tullong and Murrain. The former chiefly resides in the neighbourhood of Dart Brook – the latter on Pages River. The Tullong Tribe consists of 19 men, 11 women, 9 children” Total 39. The Murrawin Tribe consists of 16 men, 8 women, 5 children: Total 29.There is besides these two Tribes or Families a very strong Tribe which we sometimes see belonging to Liverpool Plains. Upon one occasion I saw about 50 men with a number of women and children.I should think about 30 or 40 blankets would be enough to issue. And a few Tomahawks would be of great value to them.” 6

Asking the government for tomahawks, indicates Francis was not fearful of conflict with the local Aboriginal people. Evidence seems to indicate early white settlers in the Scone area had a relatively peaceful existence with the local Aboriginal population, which was markedly different to the violence and massacres experienced throughout the rest of the Hunter during the rapid white invasion.

When Peter Macintyre, who was managing Thomas Potter Macqueen’s property, Segenhoe, wrote a letter to the government regarding blankets, he referred to the “Blacks on the Dividing Range”:

“…It would be of material service in conciliating the natives in the upper District of the Hunter’s River to distribute a few blankets, as these Tribes have constant communication with the Wild Blacks on the Dividing Range towards the Liverpool Plains..” 7

The Wild Blacks he was referring to may have been the tribe encountered by Henry Danger when he first attempted to cross the Great Dividing Range in 1824. “He crossed the Liverpool Range but retreated when attacked by the Geaweagal clan of the Wanaruah people west of the Murrurundi townsite.” 8

While it seems Peter Macintyre was comfortable with the local Aboriginal people by 1828; before he settled Segenhoe he was prepared for hostility. In a letter to Governor Brisbane on September 3, 1825 he wrote:

“Tho’ they (Aborigines) have plundered and forcibly robbed several, burned houses and corn (wheat) stacks, and even violated the wife of a respectable settler…., I have no doubt of being able, with my Highland lads (Scots), to defend myself and property or to run down even those desperadoes who come near my residence at Segenhoe…” 9

On the Segenhoe property, now part of the Vinery Stud, there is an old sandstone building beside the homestead, which was probably used as a strong house. There are slots carved into the stone walls to insert guns and take aim at intruders. The strong room was probably a precaution on the new frontier with bushrangers and convicts throughout the area.

There are reports of Aboriginals in the area stealing the first crops of maize at Invermien and Segenhoe:

“When the first crops of maize ripened in the “Invermien” farmland on Dart Brook, and on “Segenhoe”, beside Page’s River, the natives made joyful visits to taste the strange new fruit. Hunted away from Segenhoe by the farm servants, they took up their position on the rocky mountainside near Russley and rolled rocks down the steep mountain at their pursuers. There were very few serious incidents, however, and the peaceful habits of the Aborigines made life much easier for the Scone settlers.” 10

The low numbers of Aboriginal people in the Scone area is striking in contrast to the larger populations throughout the rest of the Hunter and over the Liverpool Range. One theory for the low numbers is the impact of disease, which may have reached the local Aboriginal population before white people explored or settled in the area. The first small pox epidemic occurred in 1789 at Port Jackson and quickly spread through other areas. In 1810 pock marks were observed on Aboriginals in the lower Hunter, giving weight to the theory that European disease preceded their exploration.

“The Aboriginal population was in fact so reduced and the fabric of the society altered in such a way that no Europeans actually saw the fully traditional Aboriginal life.” 11

“….who laid extremely ill at this place, being affected with a virulent kind of small-pox. We found the helpless creatures stretched on their backs beside the water, under the shade of the wattle or mimosa trees, to avoid the intense heat of the sun.” 12

Despite Aboriginal people being displaced from their land, the relationship with the first white settlers seemed non-violent in the Scone area. There are records of Aboriginal children being financially supported by white property owners to attend local schools, going to boarding schools with their own children, being employed on stations, having reputations as renowned stockman and petitioning for some of the first government land grants in the area.

In an article on James Noble, the first Australian Aborigine to be ordained into the Anglican Church in 1925, who worked at Invermien, Rear Admiral A.B.Doyle recalls an encounter between James Noble and Bishop Stanton of Newcastle:

“During a visit to Scone, the Bishop stayed at Invermien, and went for a walk in the garden before breakfast. Seeing a black boy raking the garden path he went over to have a word with him and, to open the conversation, said: “That fella Mr. Doyle, how long him bin sit down along Invermien?” and was somewhat shattered by Noble’s reply: “My Lord, Mr. Doyle has resided at Invermien for the past 13 years.” 13

A decent “brush” between tribes

In 1920 the Scone Advocate interviewed local resident Mr Vine, about his recollections of the Aboriginal population in the 1840’s:

“The blacks, though numerous, were very soon subdued, but tribal fights took place periodically. The more bellicose tribes Mr Vine recollects were located in the vicinity of Mr Thomas Hall’s of Dartbrook; and another known as Ogilvie’s from the Muswellbrook end. The only decent “brush” he can recall took place in the vicinity of the local Chinamen’s gardens, when the southerners paid an uninvited visit. On that occasion there were numerous casualties, but only one death. “Fifty or sixty aside were capable of putting up a decent fight” says Mr Vine.” 14

Unfortunately little remains of the Tullong and Murrawin tribes in the Scone area. Remaining members of the tribes were moved to the Aboriginal reserve, St Clair, on the property of Dr James White near Singleton. Part of the St Clair property is now owned by the Wonnarua Nation Aboriginal Corporation and a cultural education centre is planned.

In the 1880’s there were two ceremonial Bora Grounds in the area, one on Kelvinside and the other at the junction of the Pages and Isis River near Gundy. The Bora Ground on Kelvinside had a cattle yard built over it.

The Bora Ground near Gundy had more than 120 marked trees, which is the highest recorded at an initiation site. Dr Helen Brayshaw, a renowned archeologist, whose father grew up on the property Elmswood, where the Gundy Bora Ground was located, found reference to the trees in her late uncle Colin Brayshaw’s writings:

“Two very old trees with aboriginal carvings were on the river bank immediately in front of the homestead not far above the present crossing. The bark had been stripped off and the markings were plain to see. We used to climb these trees as kids. Both trees had disappeared one morning after a very high flood in the early 1920s.”  15