LAST week 150 local students from throughout the Upper Hunter came together to learn how to burn brighter as leaders and in their relationships.

Layton Fraser, chief operating officer for Burn Bright a Sydney based organisation, said they were excited to work with Where There’s A Will which takes a community approach to student well-being. 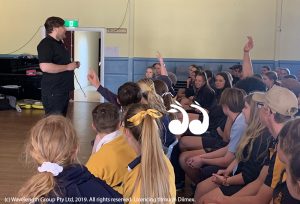 “Today is very exciting for me because it’s not very often that five schools get together and have this conversation, interact, mix, share ideas and share vision,” said Mr Fraser.

“This is our third year here and it is growing every year, which is kinda cool,” he said.

“It’s about leadership, but more the internal things like what they stand for, how they are treating others, how our relationships are benefiting our well-being, how do they build stronger relations and how to think about others; it’s the big picture stuff we don’t usually talk about,” he said.

“We also look at how do we handle situations when they go wrong to develop grit and resilience to meet challenges,” he said.

“We appreciate and admire Where There’s A Will for taking a whole of community approach, whenever they are speaking at conferences, we are always there listening and they are an organisation we look up to,” Layton Fraser said.

Lexie Meier, a year 8 student from Scone High School said it was the second time she had been to the leadership event and felt it helped bring her ‘out of her shell’.

“I love it, I don’t really like talking to new people, but I love to interact and learn to meet new people and make new friends,” said Lexie.

“Talking to new people can be difficult, especially when you are shy and this program helps with that, to come out of your shell a little bit,” Lexie Meier said.

Deacon Brown, a year 10 student from Muswellbrook High School, was new to the program and said it was “pretty good”.

“You meet new people and learn some cool stuff about them and have a good time,” said Deacon.

“Learning to be more socially ept and to learn how to talk to people more easily, it’s pretty good and a skill I’ll keep,” Deacon Brown said.

Natasha Marsh, year 8 student from Merriwa Central School said even when you can’t find common ground with someone it is nice to chat with someone new.

“It’s very interesting to find out how people can have common ground over the simplest of things,” said Natasha.

“Sometimes there wasn’t common ground, one person wants to go bungy jumping off a really tall building, but that’s not something I’d ever want to do,” she laughed.

“We did a speed dating activity and we meet some interesting people and it was nice to chat to someone new,” Natasha Marsh said.

“We make sure they have PERMA – Positive emotions, Engagement, Relationships, Meaning and Achievement and at the end of the day if these students have been involved with that, that’s fantastic,” said Ms Hunt.

“They are starting to warm up and make fantastic connections with people from other schools and that’s a fantastic thing in itself,” she said.

“We’d really like to run two of these a year, today’s sponsor is the Regional Australia Bank and we’d love to get another sponsor to run another one, because 150 students across the five schools is not a lot” she said.

“We’d like to do 300 every year and expose the students to this team building initiative which means they build really positive relationships with other kids and that’s really important if we want them to thrive,” Lindy Hunt said.