Entries for the race for Upper Hunter

Warning: The following is completely speculative and may have no grounding in reality at all, but is a bit of fun.

THE horse capital of Australia doesn’t mind placing a bet and the chatter has begun about who will be entering the race for the Seat of Upper Hunter, since the former winner went lame, but managed to escape to pasture under threat of being euthanised by the stewards.

The timing of the race will be called by the Coalition, who may drag things out while they decide what horse may have the best form.

James Burns, Upper Hunter Shire Councillor, has always been champing at the bit for a saddle to be put on him. He would be compliant for the Nationals or Liberals and has even been a Union member. However, he only managed to limp into Council on less than half the votes required and relied on leftover votes from Lee Watts to help him become a Councillor. It’s unlikely he’d make the distance across an electorate.

But there are rumours of a dark horse of Hope from up north riding in, who is an experienced hand holding the reins at a Council level. Andrew Hope recently stepped down as Mayor of the Liverpool Plains Shire Council so he may have the time, but we’ll have to see if he has the inclination. 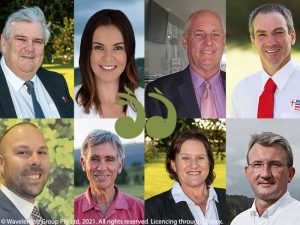 Melanie Dagg was the Labor candidate at the last state election and was parachuted in, after Martin Rush stood down, following allegations of assaulting a woman, but Melanie is scratching of her own accord.

Labor are scouting around and the field may have narrowed to the Mayor and Deputy Mayor of the Singleton Shire, Sue Moore and Tony Jarrett. Labor is remaining tight-lipped.

The Shooters, Fishers, and Farmers will be entering the fray again but will be changing horses since Lee Watts was a firm no this time. John Preston will probably be their pick. You might remember him from the 2019 campaign. While he has enjoyed quietly living in the electorate with his young family after selling up and leaving Sydney with a wheelbarrow full of cash, it remains to be seen if he wants to enter the political circle again.

Tony Lonergan is predicted to continue to rattle the birdcage and ensure there is a voice for the Greens in the area and Richard Stretton has been a reliable stayer for the Christian Democrats.

Lee Watts has said no to running again, but with a short distance race, we wouldn’t be surprised if she is a late entry.

One Nation wants to run a horse but was last seen wandering around empty paddocks, so if you can point them in the right direction, give them a call.

Make sure to let us know in the comments who you’re backing to enter the race.