Filed in Just In by Elizabeth Flaherty December 21, 2021

WAYNE Riley said he has had a vision for development on his land in Scone, which has changed at every turn with Council and leaves him and other developers at a loss.

When Mr Riley heard about a petrol station proposal in Aberdeen Street, he was shocked such a development could be proposed in the location and put forward his land on the northern end of the bypass as a better alternative.

Transport for NSW advised Council such a development would be better suited at a location to the north or south of the bypass, however the proposed development is still being considered by Council for Aberdeen Street. (Read: Transport for NSW concerns for petrol station).

Editorial note: Yesterday I was declared a Councillor on the Upper Hunter Shire Council. This story was already in draft prior to being a Councillor, however I will no longer be reporting Council matters on scone.com.au. I will still be writing about Council on www.elizabethflaherty.com.au and expressing my personal views from the position of a Councillor on a range of matters. These will also be posted to a Facebook Page.

Wayne Riley said it was just one of many decisions on development and land zoning over the past 20 years in the Shire that has confounded him.

“I honestly don’t know what I’ve got to do to get a fair go,” said Wayne Riley.

“I’ve done four rural residential developments in other areas, but with Upper Hunter Shire Council I have no idea; I’m not asking for any favours, I’m not asking them to do a development on the wrong zoned land, but they seem to do that in spades for others,” Wayne Riley said.

In 1999 Mr Riley purchased approximately 40 acres of land on the New England Highway north of Scone, bordering the Common Road near the cemetery.

“It was knocked back and I wasn’t really given a reason; I was asked if it would attract thoroughbred breeders, but I explained it wasn’t meant to be a stud development, it was meant to be residential and I hoped it would attract buyers who loved horses and they could have them there and still be close to town,” said Mr Riley.

“I was also told the Common Road intersection was an issue and I’d have to pay for it to be upgraded as part of the development, I was prepared to contribute, but that road needs to be addressed by Council anyway for access to the cemeteries; at the moment there are long funeral processions stopping on the New England Highway and that’s not safe for anyone,” he said. 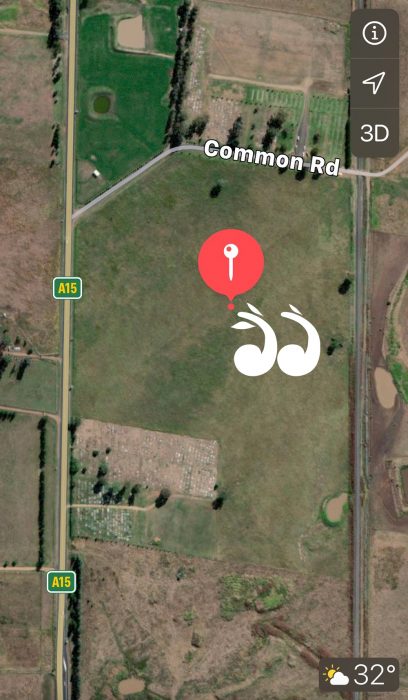 The land owned by Wayne Riley north of Scone.

Approximately two years later Mr Riley began looking at new industrial and business areas being developed in other towns and thought it may be useful for Scone, since the old industrial area was becoming constrained.

“I put my idea to Council and I was told I was two or three years ahead of myself, which I thought was a strange comment at the time, but looking back Council still had some land available for sale in the old industrial area,” said Wayne.

“Then there was some strong land sales and they called me back a few months later and asked if they could rezone my land, I agreed and was fairly excited I could finally do something with my land,” he said.

“Then Councils tarted developing land with Burton’s and all of a sudden there is 80 acres of light industrial business blocks on the market and so I wasn’t going to be able to sell my land or develop for much longer than I’d hoped,” he said.

“I then noticed people were having trouble getting accommodation in Scone and people working in Scone were having to travel to Muswellbrook and Murrurundi, so I began looking into having a motel on the highway.

“I thought it would help keep people in town rather than going to Muswellbrook, plus on the highway attract more travels who would then have dinner in town and grab their coffees in the morning.

“But in 2013 there had been a shift in planning laws and while the land had been very flexible and could have accommodation when we bought it, but after 2013 that changed.

“By this stage we were getting pretty frustrated and we weren’t able to do anything.

“Late in 2018 I rang the Steven’s Group, I could see they were having trouble with the zoning in Aberdeen Street, it was flood zone and the residents all had concerns and I thought they might be interested in part of my land which was already zoned for that kind of development, but then by the end of 2019 that had gone cold.

“I had a meeting with Council to try and see what I could do on my land, when I asked about doing a motel I was told that wasn’t possible because Council didn’t want motels on the highway, they had to be in town.

“I questioned where they could put a new motel in town without having to tear down houses to do it and how a location on the highway would attract people travelling to stay in the area, especially after the bypass.

“An RV park was raised and I said I’d been keen to do that, again on the highway it would attract people driving past and the aim would be for them to stay the night, unhook and go into town for dinner and stay in the area a while.

“I was excited about doing a really good development, purpose built and attractive from the highway and I thought it was ideal, rather than having an RV park within the township where it wouldn’t be seen by people driving down the highway,” he said.

“But I was told in the same meeting that it would count as a accommodation and wasn’t appropriate either,” he said.

“The very next month Council passed a motion to provide more RV facilities at the Bill Rose Sports Complex,” he said.

“When they said no to the accommodation I was at a loss and said ‘fine I just want to go back to the residential lots’ on my calculations eight homes out there over the past 20 years at about $100,000 from each home being spent on everything from new cars to groceries that comes close to $20million which could have come into the local economy and that’s not even including the cost of building a $400 to $500,000 home on the blocks,” he said.

“But I was told they weren’t interested in small rural residential blocks,” Wayne Riley said.

Wayne Riley said the blocks he keeps coming up against are common to many people wanting to develop Scone and said Scone is regressing.

“When you look at a place like Mudgee, which was relative to Scone when we bought our land, it has grown in leaps and bounds and they have planned it out really well, but when you look at what’s happened in Scone over that same period, it’s gone backwards,” said Wayne Riley.

“If they don’t have some vision and direction and people wanting to do things in Scone see zoning chopping and changing and things being changed to accommodate some people and not others, why would anyone want to invest and develop here?” he questioned.

“I’d love to sell my land at this stage, but investors who want to do developments in town are looking for land which is ready to go for development and for Council’s that have streamlined processes that are fair, so that they know they’re not going to get caught up for years spending money and not getting anywhere,” he said.

“I feel like I’m jumping through hoops with Council’s opinions not fair and transparent planning laws,” Wayne Riley said.