Premier Gladys Berejiklian said the lockdown measures will be the same as the current restrictions in Greater Sydney and will likely last for one week.

“Having said that, I want to confirm the arrangements in the eight local government areas will be exactly the same as exists in Greater Sydney, including the Central Coast,” she said.

“So that means no school and the same stay at home provisions apply,” said Ms Berejiklian.

Dr Kerry Chant said although it is too early to speculate on how the cases arrived to the Upper Hunter, contact tracers believe someone from Greater Sydney attended a beach gathering on Blacksmith Beach.

“While the source of infection continues to be investigated, we think the source originated from a gathering on Blacksmith Beach on Friday night, believed to be the source of the initial cases,” Dr Chant said.

“So we believe there may have been people there from Greater Sydney and that’s how it was introduced. But, as I said, our strongest focus – and I really ask the media to assist us here – in getting to the bottom of how the disease was transmitted and introduced into Newcastle,” she said.

“That is in the best interests of everyone at this time for us to get to the bottom of it and I think we need to work with individuals and I thank people for being open and honest with us, so we can track down any chains of transmission,” she said.

Dr Chant urged regional residents to not be complacent and continue to look for symptoms and get tested.

“I think regional New South Wales would be very attuned to the risk of people that have come in from Greater Sydney. I know that there’s probably been lots of reports, and police have probably responded lots of times to rural communities highlighting when people are in breach and I know that police have also put in a lot of surveillance activities,” Dr Chant said.

“So, yes, we are very concerned. And that’s why no-one can be complacent,” she said.

“And I’m asking, you know, whilst we have allowed rural New South Wales to continue a range of activities which are not available to people in Sydney, we need to make sure that you are still vigilant about signs and symptoms, getting tested. You cannot be complacent,” she said.

New South Wales recorded 262 new locally acquired cases up to 8pm last night, 43 people were infectious in the community and 133 cases are under investigation.

There has now been 21 deaths during the current outbreak. 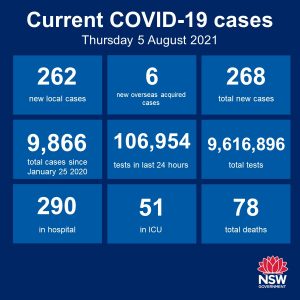