What Has Council Confidentially Purchased?

AT November’s Council meeting this week, Daryl Dutton questioned Council’s use of confidential closed meetings for strategic purchases and said he believed Council was breaching the Code of Practice guidelines by not disclosing the details of the resolutions after they were decided.

Listen to this section of the meeting, in the audio file below.

Mr Dutton highlighted 20 instances during the last two Council meetings where Council had not disclosed the details of decisions they had passed relating to the land committee and strategic purchases. 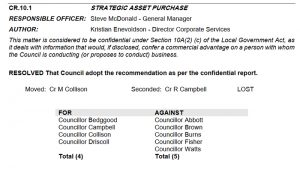 One example in the minutes, where the nature of Council’s purchase decision is not disclosed to the public.

“Councillor Abbott was on the mark when she raised these questions and you’ve just witnessed in the acceptance of the previous Council minutes,” said Mr Dutton.

“…confirms to me a culture of secrecy that has developed in this Council in recent times,” he said.

Mayor Wayne Bedggood interjected Mr Dutton during his address warning him “to be very careful” and not to talk about secrecy, claiming it was untrue and defamatory.

“You are insinuating that there is a culture of secrecy and you’ve repeated that on three or four occasions, please don’t!” said Wayne Bedggood.

Mr Dutton said the sale of the library building was a well known example of a transaction which occurred behind closed doors and questioned what deals were being done now that the public were not aware of.

“Council could resolve anything and you would not know, you as members of the public have a right to know and Council is obliged to tell you,” he said.

“The culture of secrecy must stop now. Upper Hunter Shire Council is a public authority, it must act honestly, transparently, be open to scrutiny and compliant with its own regulations,” he said.

“A loss in confidence, a loss in reputation, a loss in community engagement are consequences of such a culture of secrecy,” said Mr Dutton.

Councillor Ron Campbell took the opportunity to ask Mr Dutton a question, however did not ask a question, instead said “I very much resent the secrecy you are proposing to us…”

The minutes endorsed at the October Council meeting show 16 items voted on by Council, relating to land purchases, provide no detail on what the items relate to: See the minutes: p.15 – 17.

Hear this section of the meeting:

scone.com.au has asked Council in email to confirm if community reports relating to key purchases, including Campbell’s Corner, have any truth to them, however, Council has not responded to our questions.

« Editorial: No Plan for Tourists
Airport Motion: Hear The Meeting For Yourself »