A Century of Thoroughbred Excellence

Filed in Sports Recent by Elizabeth Flaherty May 28, 2016

Two of the horses walked from Percy Miller’s Kia Ora stud in the Segenhoe Valley near Scone to the railhead at Aberdeen in 1943 for a shipment to Sydney for the Inglis Easter yearling sales were the Midstream colts Shannon Murray Stream. 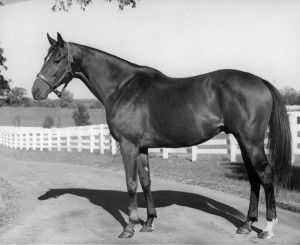 A stallion shot of Shannon at Spendthrift Farm, c.1951. Photo courtesy of Keeneland-Meadors.

Shannon ranks as one of Australia’s greatest milers and overseas export.

After winning races in California in world record times, he went to stud and got good winners, before premature death at 14.

Shannon and Murray Stream were among hundreds of winners bred by Miller in thirty years in the first half of last century.

At the time Kia Ora challenged as the biggest and most successful source of winners in the world and on occasions they took over 100 yearlings to the Easter sales.

Sent down several months before the sale, they were either led or driven to the Aberdeen rail station and loaded in special horse boxes on trains.

Off loaded at Sydney’s Darling Harbour, they were then led in the early hours of the morning out to the paddocks then encompassed by the Inglis sale yards at Randwick. 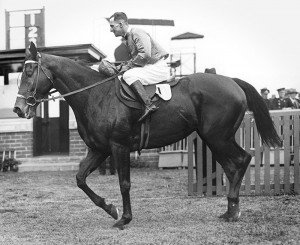 Armounis and jockey Harold Jones at the Futurity Stakes in 1930. Image sourced from wikipedia.

One historic galloper who wasn’t sired on Kia Ora, although they often get the credit, is Peter Pan, winner of the Melbourne Cups of 1932 and 1934.

He was bred by Rodney Dangar of Singleton from a mating with Pantheon with the Dangar owned mare Alwina.

Pantheon, the import who finished third in the 1926 Melbourne Cup, and stood initially at the Kingsfield Stud.

Moved next door to Kia Ora the next year, Pantheon got Peter Pan from his one season at the Kingsfield Stud, one which subsequently had much of its country swallowed up by Glenbawn dam.

Peter Pan’s dam may have been railed to Aberdeen then walked to Kingsfield.

Kia Ora was part of a 10,000 acre grant in a valley served by the Hunter and Pages rivers provided to English businessman and politician Thomas Potter Macqueen in the early 1820s after it had been surveyed by Rodney Dangar’s grandfather Henry Dangar.

Established for Macqueen by Peter MacIntyre, the valley was called Segenhoe after Macqueen’s birthplace Segenhoe Manor.

In 1862 they stood the first thoroughbred sire in the Hunter Valley, an English bred stallion named Crawford.

As there were very likely a few mares in the region as early as 1820, the Hunter Valley celebrates over 200 years as horse breeding country.

One of the greatest Hunter Valley bred horse of early last century was the 1916 foaled Beauford, the winner of 17 races.

He ran four times against the icon performer Gloaming and beat him twice.

He was bred by the Mackay family, owners for over half a century of the Tinagroo stud northwest of Scone.

In the 1950s Tinagroo stood the English import Lighthouse 11, the sire of the all-conquering Australian champion Sailor’s Guide.

Another branch of the Mackay family produced in the Upper Hunter Royal Sovereign, winner in 1964-65 of the AJC, VRC and QTC Derby’s and second in the Caulfield Cup.

One of their properties joined Sledmere stud at Scone, the one on which Sailor’s Guide was raised.

He followed up wins in the Victoria Derby and Sydney Cup by being awarded the Washington DC International in America after being second across the line.

In the same year that Beauford was foaled, a horse produced on Camyr Allyn on the southern side of Scone went on to be a giant of Australian racing.

He was Eurythmic and he won 31 of his 47 starts, including top races in Perth and Melbourne.

A rival of Eurythmic and Beauford was Poitrel, a winner of the Melbourne Cup under ten stone (63.5kgs).

He was bred by the Moses brothers, then owner of Arrowfield Stud, now Coolmore, at Jerrys Plains.

They were leading breeders for 20 years early last century and included among the horses they bred Heroic, an outstanding galloper and seven times champion sire. 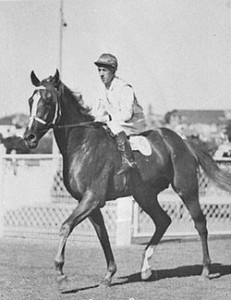 Bred on Widden, one of his sons, Ajax, won 18 races straight.

One of the early champions raised by the Moses on Arrowfield was Poseidon (1903), but they bought him as a foal at foot with his dam off Rodney Dangar when he broke up the Neotsfield Stud near Singleton in 1904.

He backed up to take the Caulfield Cup again at four, but could only manage to finish eight under the burden of ten stone three pounds in his second attempt at the Melbourne Cup.

In the same decade that Poseidon won the Melbourne Cup, the great staying test was taken out by four Hunter Valley bred horses, namely Lord Cardigan which won at three in 1903 and a close second to another Hunter runner, Acrasia, in 1904, Lord Nolan (1908) and Prince Foote (1909).

Lord Cardigan and Lord Nolan were both bred and raced by a Maitland identity, John Mayo, and were Dangar’s imported sire Positano, a son of the world’s leading sire of early last century, St Simon. Positano also sired Piastre,which won the 1912 Melbourne Cup and Mooltan which came second in 1907.

The biggest source of winners in the Hunter Valley in the quarter century 1950-75 was Woodlands stud. In that era it was under the ownership of George Ryder, the father of the Golden Slipper and stood a number of good sires, including Newtown Wonder and Pipe of Peace.

For 20 years from the mid-1980s, Woodlands in the ownership of the Inghams, became one of the biggest breeding operations in the world.

One of the horses they bred and raced was Lonhro, an Australian Horse of the Year and now a champion sire.

Several years ago, Inghams sold their thoroughbred empire to Sheikh Mohammed Maktoum, a ruler of Dubai in the United Arab Emirates and one of the world’s leading stud, broodmare and racehorse owners, for a price reportedly close on half a billion dollars.

He had already established the Darley stud near Aberdeen.

Darley is one of the big players in a revolution in horse breeding and racing that has elevated the Hunter Valley in the current century into one of the world’s greatest thoroughbred regions, both in the quality of the products and the showplace appearance of its studs.

The Hunter Valley’s use of visiting sires took off in 1990 with the debut appearance of Danehill a champion European 3-year-old sprinter who went on to be Australian champion sire a record nine times and to become the biggest force in Australian breeding history.