Win for Merriwa residents from NCAT

Filed in Just In, Recent News by Elizabeth Flaherty October 27, 2021

COUNCIL spent $9,593 in legal fees trying to withhold the Geotechnical Report on the Merriwa-Willow Tree Road, but the NSW Civil and Administrative Tribunal found there was no evidence to support any of Council’s grounds and ordered them to release the Report in full.

In his reasons for ordering the Report to be released, Senior Member Goodman made particular mention of “negligent or improper conduct”, which may be evidenced by the Report.

John Preston, who represented scone.com.au (for free) in the proceedings said the Report provides strong grounds for the residents of Merriwa to sue Council.

“Council had an obligation to repair the road as part of their functions under the Local Government Act and they clearly failed to do so,” said Mr Preston.

“There is little doubt in any reasonable person’s mind that great economic costs are being born now by the residents of that area and the blame for that lays entirely at Council’s feet as they’ve unambiguously been negligent,” he said. 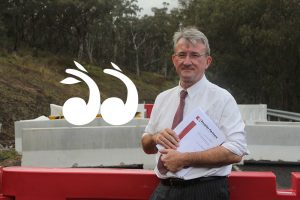 John Preston at the Merriwa-Willow Tree road with the Report he fought to extract from Council in NCAT.

“The inconvenience and cost from Council’s inability to discharge their duty appears to have caused great cost and inconvenience to the residents of the area and they may like to turn their minds towards a representative action,” he said.

“I was very happy to support scone.com.au in obtaining the document and I would be very happy to assist the people of Merriwa,” said John Preston.

Mr Preston advised people who are incurring additional freight and other costs, due to the road being unusable, should keep all documentation as evidence of their financial costs and was happy for his phone number to be published for residents to speak with him. See the bottom of the story.

HOW SCONE.COM.AU OBTAINED THE REPORT

For more than a year scone.com.au fought Council to obtain the Geotechnical Report on the Merriwa Willow Tree Road.

In August last year Council refused scone.com.au access to the report claiming it could prejudice an investigation into the Road.

Scone.com.au referred the matter to the Information and Privacy Commission (IPC) which found: “it appears the Agency (Council) has not provided reasons for its decision”. Further, they found Council provided no evidence how releasing the Report could prejudice any investigation into the Road.

Council agreed to undertake the review, however their decision remained unchanged and the matter was referred to the New South Wales Civil and Administrative Tribunal (NCAT).

In arguing against releasing the Report, Council attempted to use laws relating to policing and terrorism, described by John Preston as a desperate attempt to, “chase every legal rabbit, down every legal hole, on a meritless defence.”

In assessing the matter Senior Member Goodman, stressed the default position under GIPA is the legal right of people to access information and also noted the release of the Report was in the public interest to:

Read the full decision from NCAT.

In response John Preston laughed, “they had no legal grounds to withhold it in the first place!”

“This just demonstrates Council’s attitude towards proper disclosure, on any reasonable version of events it is woeful,” said Mr Preston.

“This was a report the ratepayers had paid for and were entitled to see, it belongs to them,” he said.

“I think Council’s understanding of providing information to people who already own it, is about as good as their road construction,” John Preston said.

The Office of Local Government is still conducting a review into Council’s management of the Road.

Council has also spent a further $14,000 of ratepayer money fighting to withhold emails from scone.com.au this year. NCAT made the determination Council had to release the emails…a story coming soon.

Special thanks to John Preston for representing scone.com.au in both matters free of charge. Council may have been counting on an NCAT matter being cost-prohibitive, but thanks to John, that wasn’t the case. We are grateful that people like John Preston exist and fight the good fight for our community, with a great sense of humour to boot! John is happy to be contacted by residents of Merriwa to help ensure they are not left out of pocket by Council’s negligence: 0412 666 422.