IN January, part of the new $9.6 million Willow Tree Road washed away, triggering Council to apply for an urgent loan for repairs last month and revealing the road was uninsured.

Council is awaiting a geotechnical report to define the costs of the repairs, but has voted to seek loan approval for up to $5 million.

Councillors were divided over the motion to allow the general manger, Steve McDonald, full financial authority to apply for the loan, without knowing the actual costs of repairs and without an extraordinary meeting of Councillors to approve the loan amount. 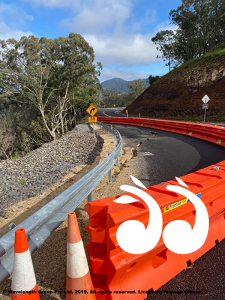 Cr Lee Watts expressed concerns about the loan approval process and that Council did not have insurance for the road works.

“I also have concerns about that money in relation to the loan, but what I do think needs to go into practice into in relation to such a high expenditure on roads, is that insurance is covered in the future and any roads like that with that amount of money at least we could come back and we would be covered and now because of the issues that have arisen with the water, now we have to find additional money for the roads,” said Cr Watts.

“I would like to see the costing come back to us as Council, the amount, before I’d go any further,” she said.

Cr Ron Campbell said the road needed to be repaired as a matter of urgency for local business.

“I certainly wouldn’t be pushing for an open cheque on this matter,” said Cr Campbell.

“When this geotech report comes back then I think it’s time for us to individualise and see just exactly whether its going to continue or whether it’s not, but until such time that happens, it’s really only an assumption,” said Ron Campbell.

“What I do disagree with is proposed loan borrowing, without an amount in front of me,” said Cr Watts.

“Could you not have an extraordinary meeting? I just don’t feel comfortable,” she said.

Cr Brown also sought further explanation, “just to clarify this resolution will give the power to the general manager to execute the loan and to receive the money…”

“For the sake of the abundance of caution add a third point to the resolution that prior to the execution of any loan agreement that it may be reported to Council for consideration,” said Cr Brown.

Councillors Bedggood, Brown, Campbell, Collison, Driscoll and Fisher voted for the resolution to apply for $5million loan, while Councillors Abbott and Watts voted against and the motion was passed.

Scone.com.au has asked Council to confirm if the road has been acquitted; a standard process whereby the road is inspected to ensure it has been built to appropriate specifications and grant money for the project can then be released to the Council. Council is yet to respond.