Filed in Recent News by Elizabeth Flaherty May 16, 2017

DONATED clothing is always appreciated in the charity bin, but grass clippings and rubbish being dumped there is not said Father Peter Thoai Ngoc Nguyen from St Mary’s Catholic Church.

The St Vincent de Paul charity bin which is located in the grounds of the catholic church is being used as a dumping ground for people’s waste. 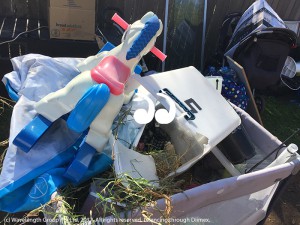 Rubbish such as grass clippings are being dumped at the charity bin.

“The bin is at the back of my yard and I walk out and think ‘this is not a tip and it’s not the right thing’,” said Fr Peter.

“We really appreciate things that are donated that we can use or resell for charity, but we are finding things like grass clippings, rocks, electrical things that don’t work and even a chicken box,” he said.

The items of rubbish are being dropped off at the charity bin during the night which people from St Vincent de Paul then need to collect and pay to deposit at the tip.

Father Peter wanted to be clear warm clothes and donations which can be used by others in need were valued. 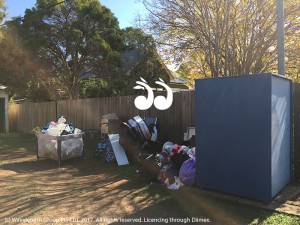 Items and rubbish dumped behind the St Vincent de Paul bin in Scone.