Filed in Just In, Sports Just In by Elizabeth Flaherty June 2, 2020

On Saturday, May 30 at Scone Golf Course a near full field enjoyed the very well presented course. Well done to the greens staff. It was a fabulous day for golf. The morning players had some fog at the start but this lifted to reveal a pleasant autumn day, even the crows were having a spell it seems. 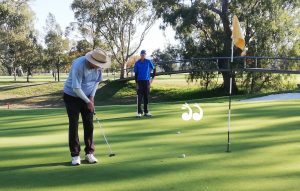 Mick Alsleben played in the morning and returned a fine round of 37 points which started with a wipe but then included 4 birdies! This was the best score of the day on a countback and allowed him to win A Grade. John Roe won B Grade with 35 points and the C Grade winner was Geoff Barton who also had 37 points. Ross Higham was enticed out of golfing hibernation and his Bradmans award hopefully will encourage him to continue!

The Thursday competition on May 28 had a field of sixteen (6 ladies and 10 men). Two players found the going good whilst it seems the rest of the field struggled on the course which was heavy from the recent rain.

The Scone RSL Group prize winners were Garry Taylor who had 39 points and Baz Wintle who had 37 points.

This week players had their first attempt at using a new device attached to the flag. This allows a lever to be lifted with a putter to expel the ball from the hole that is set at its full hole depth, as opposed to a noodle in a portion of the hole. Thank you to member Brenan Reeves for the construction and donation of the devices. 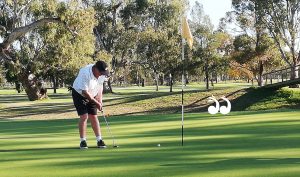 David Druce putting on the 13th at Scone Golf Course. 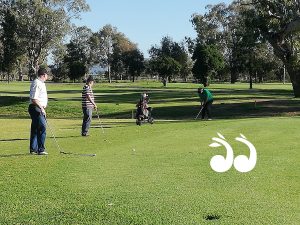 « Weather: The Week Ahead
Gyms Can Reopen June 13 »