Old Timers – Their Horses and Courses 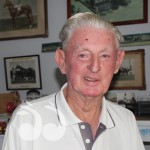 THE theme for the 2002 Scone Horse Festival was The Outback.

It would be hard for those growing up today to imagine the township of Scone or surrounding districts, with all of today’s modern conveniences and transport making the cities a matter of hours away, as ever being associated with the outback.

Some of the roughest country in New South Wales, thanks to the Barrington Tops Road linking Scone with Gloucester, can now be travelled by motor vehicle as their occupants look down on upending waves of tree tops in an area of mountain and forest covered slopes.

This was the country, I suppose we could say, that was the outback in this neck of the woods that Henry Dangar and his men explored in an era when their  saddle and pack-horses where an evident part of every exploration party.

As parts of the Upper Hunter develop it was a necessity for landholders to have not only a good saddle horse but also a strong breed of cart horse for moving equipment and stores and coping with the open, road-less countryside.

With Peter McIntyre settling Segenhoe for Englishman Potter Macqueen among the first consignment sent to Sydney in 1824 were a Suffolk Punch and a Lincoln Shire, both breeds having a significant role to play in the development of Segenhoe.

By the mid-1820s there were 29 horses on Segenhoe and by November 1827 there were 12 horses on Invermein. William Dangar at Turanville had two horses, the hall brothers at Dartbrook had one each and Donald MacIntyre, newly arrived at Kayuga, also had one.

The largest number was at Segenhoe, followed by the Cox family estate of Negoa, near Muswellbrook.

In the early years horses were an indelible part of life, but not only as a means of transport and for use in the workforce, they were making their mark as a leisure outlet for colonial Australians.

Soon racetracks appeared throughout the valley and beyond with centres like Maitland, Singleton, Scone, Cassilis, Dungog, Cessnock, Warkworth, Bulahdelah and Stony Creek all posting meetings.

Racing also took place at Woolooma during this period where it is reported that the annual Anniversary Day races were run on Monday, January 29, 1940.

A good crowd witnessed the running of the nine-race card, two bookmakers fielded on the day and a wireless was installed by Scone electrician George Davies to broadcast Sydney and Melbourne races.

The meeting that year was held on Gordon Archibald’s “Nabinabah”.

This could have been the same course where A. McLean’s gelding Redbank won the Cup in 1928, although it is reported that the first recognised racetrack at Gundy was situated behind the Linga Longa Inn, with six bush posts spaced in furlongs to indicate where the horses were to race.

The St Aubins racecourse was the venue for the first St Aubins Shearers Sports in 1893 to celebrate the completion of shearing.

Racing was a purely amateur affair.

The White family of Belltrees conducted sports including horse racing that attracted 500 visitors in 1893.

It has not always been the fine-lined thoroughbred that has provided entertainment for the horse admirer or the general public as a whole.

A breed emerged that was skilled in the operation of cattle on country and outback properties.

The Australian Stock Horse had found its way onto the arenas of the traditional once-a-year Bushman’s Carnivals.

Those lucky enough to succeed at these outings gaining added glory at the Royal Agricultural Shows held in each capital city, showcasing not only the cream of livestock, horsemen and women, but every aspect of rural life on the land.

The benchmark for the breed would probably be Norma, Reg Watt’s great mare proving almost unbeatable on the campdraft scene in the late 1930s.

The versatility of the breed could be gauged through a mare called Bonnie who excelled at show jumping.

Her daughter Lady Radiant was rated by the great horseman Harold Willard as the best pick-up horse he had ever ridden.

That could be disputed by those who remember the Murrurundi duo of Terry O’Brien and his champion chestnut, Popeye.

With no offence to those great campdraft combinations I have mentioned I may have overlooked Gwen Winter on Seagull.

Jack Palmer on Vivid, Carl Mitchell on Doreen, Ian MacCallum on Solitaire and in the later years Bob Palmer on the champion mare Berger Breeze.

Rough riding, whether it be on horse or steer, is as much a part of country life as having a quite one at the local.

Household names on the rodeo circuit in bygone years included Jimmy Jupp, Jacky Stanton, and home-grown champions Arthur Bowd, Jack Palmer, Arthur Bowd and Tommy Wharton and then there was the average run-of-the-mill bloke who broke in horses and mustered cattle for a living while making his annual pilgrimage into the nearest town to do it for leisure at the Bushman’s Carnival.

Bringing more colour and entertainment to the rural and outback towns in those early days were the buckjumping tent shows.

Some of the roughriders I have mentioned would have excelled in this environment, pitting their skills against Mandrake Aristocrat, Rocky Ned, champions of the rope ring and their masters, Tex Morton, Stan and Kitty Gill and the great showman, Lance Schuthorpe.

Scone was no stranger to these travelling favourites where hundreds queued to gain entrance as one wily youngster hollered fire while his mates ducked under the tent flaps, rather than part with sixpence (5 cents).

In an article of this size it is hard to cover all of the horse sports and their participants that the Scone area is renowned for.

These include Polo, Pony Clubs, Polocrosse and Equestrian, who at some time or other over the years have competed with distinction, not only at state and national level but internationally as well.