No Fire Alert Continues During Fuel Spill Clean Up

THE Upper Hunter Shire Council has again issued a warning to residents in between the Kelly St and Mount St intersection, to the Bill Rose Sports Complex, Scone not to light any fires or have any potential ignition sources in the open, as they managed a fuel leak which was detected on Thursday afternoon (HAZMAT Called to Scone Sewerage Treatment Plant). 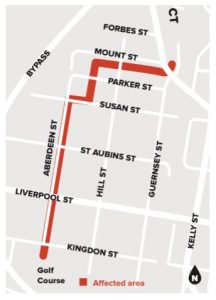 Council map of areas impacted by the fuel leak, where a no fire alert is in place.

Council have advised the no fire alert is precautionary measure and if there was an unacceptable level of risk they would have been evacuated.

Fire and Rescue NSW monitored the fuel gas levels and by Friday at 5:30pm advised the gas levels had dropped to a safe level.

Council has continued monitoring, flushing and ventilation and tests at 7am this morning showed the fuel gas levels have dropped further.

Once fuel gas levels are low enough, Council will inspect sewer pipes with cameras under Kelly Street to assess the condition of the pipes and if required make repairs or replace sections of the pipes to minimise any infiltration of the fuel and advise when no further fuel is entering the sewer network and lift the no fire alert.

Due to forced ventilation of the sewer lines with industrial extractor fans, residents may notice more sewerage smell near ventilation points and Council apologises for any inconvenience.