Filed in Just In by Elizabeth Flaherty January 16, 2020

ABBEY Stone is philosophical about closing the doors to Stone & Co in Murrurundi on January 24, following an order from Upper Hunter Shire Council and said while she appreciates the community support, they are focused on their sale and the next chapter of their popular business.

Abbey and her family moved into the heritage building on Haydon Street two years ago with a vision to restore it to former grandeur as their home and as a local business centred around a range of beautiful home decor and furniture. 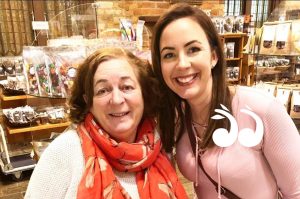 Abbie Stone with her mum Sue are just focusing on the sale and the next chapter for Stone & Co.

The business has been operating on a conditional development application during renovation, with fire codes being  a sticking point, unfortunately on Monday the Upper Hunter Shire Council has called time trading and issued a notification that they must cease trading by 4pm on January 24 or face a considerable fine.

Abbie explained her dad, a qualified trades person had been diligently working on the premises, with the assistance of other trades people to bring it up to standard, but time had run out.

“We will still finish the building and keep up with heritage compliance; we’ve tried to preserve everything that we can in the building, as much as the original floor boards as we could, the staircase, all of the beautiful pressed tin and while we can still live here, we can’t trade as a retail business,” said Abbie.

“We still love the town, love the people and still want to bring people here to Murrurundi,” she said.

“People will still be able to buy from our online store and we will start going to big trade events like AgQuip, which will still bring awareness to Murrurundi,” Abbie said.

When asked if it might be possible to reopen the shop Abbie was unsure.

“I don’t know to be honest, if it’s going to be a major effort, then no; it’s been two and a half years since we moved in and it’s just zapped us,” she said.

“We might have another shop somewhere else in the area, or out of area, we don’t know, we will regroup after the sale and hopefully bring people to the area in other ways,” she said.

“But we want people to know it’s not the end, they just won’ be able to come into the shop anymore, but they can help us clean out the shop during the sale,” Abbie Stone said.

Customers can continue to shop from the store online, through Buy From The Bush and are encouraged to get a bargain from the store at 50% many items until they close.