THE Member for Upper Hunter Michael Johnsen made a comment on his Facebook page on Tuesday night which has been met with disgust from people on his own page, people in his electorate and other Members of Parliament.

His statement generated hundreds of disapproving comments, with people questioning if he was really a Member of Parliament and if he understood what “full term” abortion and irony meant. Please see below.

Greg Warren MP said while he respected many people from all sides of politics, he did not respect Michael Johnsen’s divisive approach within his own community and said he hoped the National Party would pull him into line.

“I don’t like the bloke, I think he’s a grub and I think his comments are a bloody disgrace,” said Greg Warren MP.

“His comments are inconsistent with his own community, with the good nature of Australia, it’s unacceptable for the Australian spirit and the spirit of Parliament,” he said.

“We have so many things going on in regional New South Wales and the Upper Hunter deserves the right attention, not attention for their state Member’s nonsensical and divisive comments,” he said.

“There is a significant Aboriginal culture in the Upper Hunter and that must be acknowledged and that doesn’t discount anyone else, but it’s disappointing for the Member to then make divisive comments that impact people in his own electorate.

“There are many people I respect on all sides of politics, Nationals, Liberals and in my own party, but what I don’t respect is someone pursuing a divisive line, during a time when we least need it.

“There are many good people in the National Party and I hope common sense prevails and they pull him into line.

“If the National Party had any sense they would get rid of him and get someone in there that can represent the people of the Upper Hunter, not the divisive nature which is all he displays,” he said.

“One thing is for sure, the people of the Upper Hunter deserve better representation,” Greg Warren MP said. 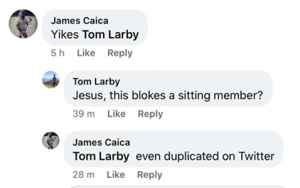