FOR 20 years, this tough as nails second rower fronted up every winter weekend for the Merriwa Magpies.

He began and ended his career with a Grand Final win and now in his ‘retirement,’ he’s the number one supporter of his eleven year old son Tye.

“The Stalwart” is a Lands Assistant with Upper Hunter Shire Council and has taken on duties as the First Aid Officer for the League Tag team, coached by his wife Gaynor.

He works for Ausgrid by day and recently bought some acreage where he’s running a few head of cattle and enjoying the good life with his family, including daughters Shai and Elly. 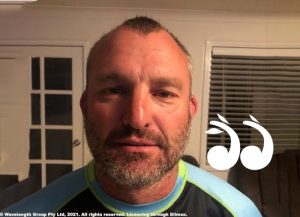 And because too much footy is never enough, this man is also President of the Magpies Old Boys Association.

Of course we’re talking about Bruce “The Stalwart” Blackadder, the latest member of the Merriwa Wellbeing Superspreader team.

Along with nine other Merriwa Superspreaders, Bruce will be trained by a certified Wellbeing Coach for three months, identify his wellbeing goals and be given actions and skills to achieve them.

He and the other Superspreaders will unleash positive wellbeing on Merriwa as well as recruit friends and family to join them for training in Mental Health First Aid, so they know the signs and symptoms of mental ill health and how to help those in need.