scone.com.au
MENUMENU
InstagramTwitterFacebook
Just In > Latest disappearance from The Cottage

Latest disappearance from The Cottage

SOMEONE stole a uniquely designed light fitting from the front veranda of The Cottage restaurant in Scone on the weekend, adding to a list of long things stolen from the small local business, including door mats and an entire garden hedge.

While the thief may have thought the light fitting might look great at their place, they will need to order parts from the makers in London for it to work.

Colin Selwood, owner and Head Chef at The Cottage, is exacerbated by the ongoing thefts and has urged the latest thief to return the light fitting, no questions asked.

“One year, we had just planted the hedge and we had the floods. There was a massive downpour as a summer storm came through and afterwards the ground was nice and wet and easily dug up and they took the whole hedge,” Mr Selwood said.

The Cottage does have CCTV, however the thief was not captured in the footage. Mr Selwood said he just wants the person who took it to leave it at the front door. 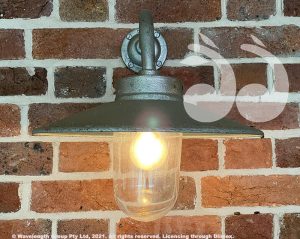 One of the many unique lights that line the front veranda of The Cottage in Scone. Photo supplied.

“It’s like a galvanised tin shade, we haven’t had to replace one of those before and the architect chose some expensive stuff, so we can’t get a copy or anything because there isn’t one,” Mr Selwood said.

“I didn’t bother reporting it to police, there’s nothing at all they can do . . . the camera doesn’t face towards the light,” he said.

“There were cops everywhere for Scone Cup but who knows what time it happened because we were there until midnight, so it could have been at two o’clock in the morning,” he said.

“To the person that took it, it is of no use to you unless you contact the company in London it was purchased from to get the piece you left behind,” said Mr Selwood.