ONE of the most popular entries for the Blue Horse Cup readers given the tip on, is the lack of revitalisation progress in Scone’s main street.

So what is the form for this major project?

IN 2016 Council, said the main street of Scone would be revitalised, before the opening of the bypass, but it is now five years down the track and 20 months after the bypass opened.

The only physical changes to Kelly Street are four sets of concrete bollards to facilitate outdoor dining and work has began on a toilet block. See images below this story.

Over budget, don’t know how: Cr James Burns, who Chairs the Council’s revitalisation committee told the February 2019 Council meeting that phase one of the project had gone over budget by $200,000 and requested more money. Cr Burns also stated he did not understand how it had gone over budget, “I don’t know it’s technical engineering stuff.” Council then passed a motion for $200,000 to be taken from the Bill Rose Sports Complex for the main street. Cr Watts and Cr Abbott insisted the money had to be repaid to the Bill Rose and it was only a loan. In the same meeting the state government announced a further $2.9 million in funding (Read: Who got whose hopes up? and Council Meeting: February 2019).

Can’t get started and $5million unanticipated: In January of 2020, Mayor Wayne Bedggood scolded the RMS for getting people’s hopes up that the main street could be started, before the RMS had done road works, “please don’t let people think we can start work now, because we can’t! Don’t get people’s hopes up that it is going to happen any more quickly than it has.” Council also highlighted they couldn’t afford to replace the concrete pavement because they had costed it at $10million and later found it would be $15million. The general manager, Steven McDonald said Council had $19 million in funding for the revitalisation (Read: Who got who’s hopes up?).

$1million footbridge with elevators needed: In July of 2020, Council passed a motion to investigate the proposal for a $1 million footbridge over Kingdon Street, following the recommendation by the Scone Revitalisation Committee in April. The ARTC said they had meet with Council and the idea had been raised with them, but no formal request had been made by Council at that stage. Cr Abbott, said it was a ridiculous waste of money and questioned how people with disabilities and the elderly would able to climb the stairs. Cr Burns said the footbridge was needed for safety and would also have lifts. Cr Abbott, asked why a simple electronic gate could not be used, as already installed at Liverpool Street. (Read: Million dollar footbridge being planned and Kingdon Street footbridge going ahead?) No further progress on the matter has been reported.

Major construction to begin mid-2021: Council announced tenders would be issued at the beginning of 2021, with major works to begin mid-2021. Council also decided they would not remove the concrete and would simply tar over the top of the concrete, previously noting they had underestimated the cost of removing the concrete by $5million. Read: Kelly Street toilets and roadworks xx

Where are the toilets?:  Cr Watts voiced her frustration that the toilets planned in the old Sports Store, now called Farram’s Lane had not yet opened saying it was likely behind deadline and Council cannot continue to propose projects, have community consultation and then “sit on it”. Cr Burns agreed. The Council advised heritage issues had been resolved, with heritage items protected and work would begin in early 2021. 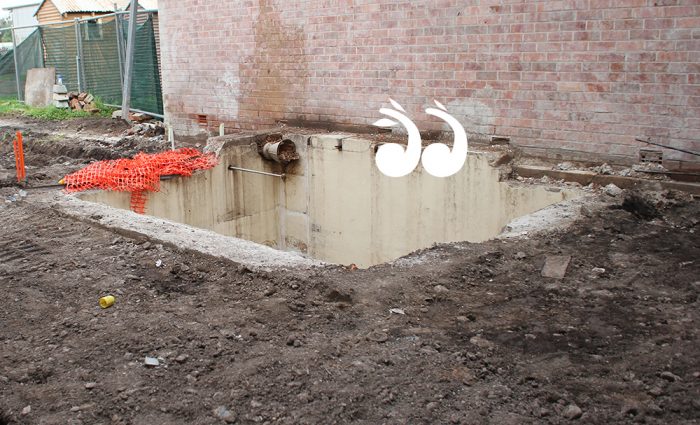 The tiled cellar unearthed at the toilet block construction site.

Toilet blockage: Work on Farram’s Lane got underway in October, instead of the beginning of the year, however a tiled cellar has been found in the building and work has stopped. At the October Council meeting Cr Burns advised Council planned to cement over the cellar, but not fill it with concrete, because they plan to come back later and make a feature of the cellar. Cr Abbott questioned if it would be cheaper not to cement over it in the first place, rather than spending more money later to take up the concrete and make it a feature.

What lies beneath? Scone.com.au has previously asked when all of the underground infrastructure such as sewerage and storm water had been laid down Kelly Street, but has not received a response. From speaking to older residents of the community, the last known time of replacement was in the 1950s. At a community exhibition, the Council representative did not know when it was last relaid, but said they were confident the underground infrastructure did not need replacing, before doing the work on top. (Read: Draining issue with Council).

Where is the main street progress up to now?

The last information posted by Council for the community was in March and can be found here: Scone CBD Revitalisation. 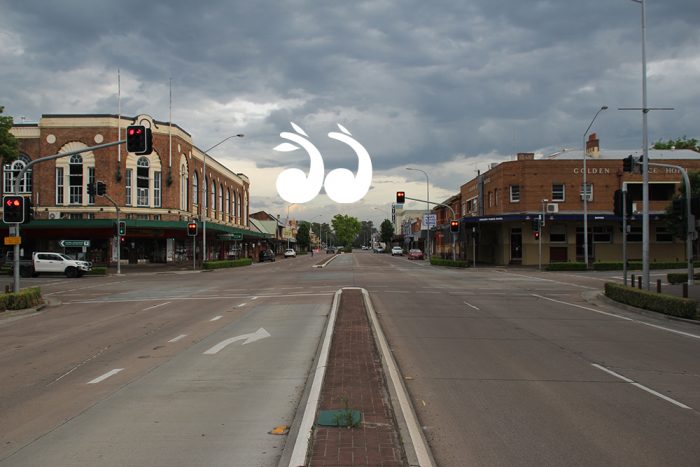 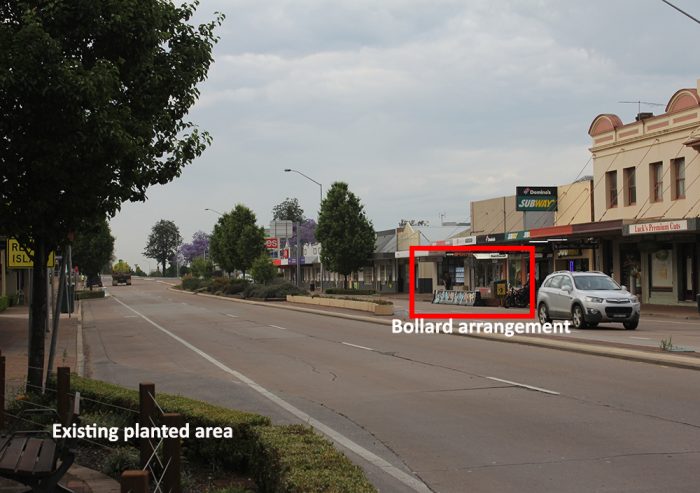 One of four concrete bollard arrangements, which have expanded dining areas in Kelly Street. 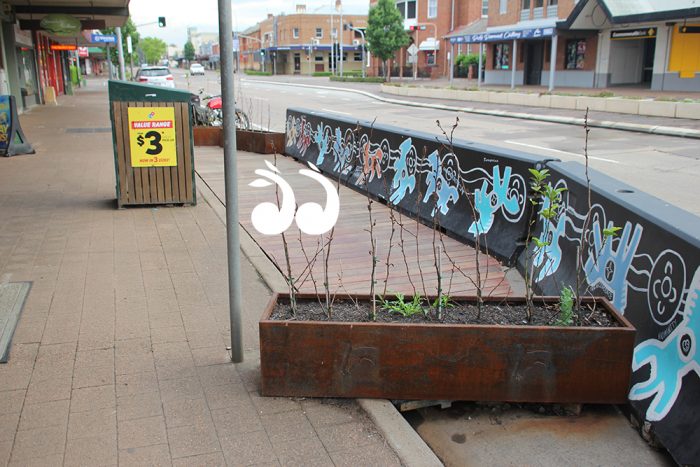 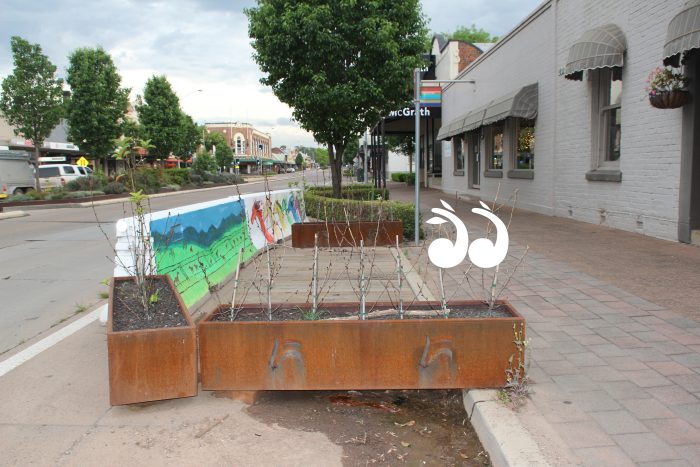 2: The bollard arrangement outside Asser House Cafe, with pre-existing planted area in the background. 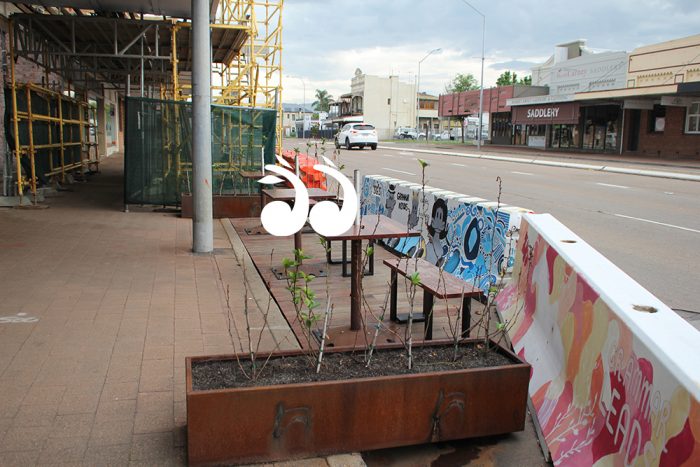 3: A bollard area in front of The Bar and next to the construction site for public toilets. 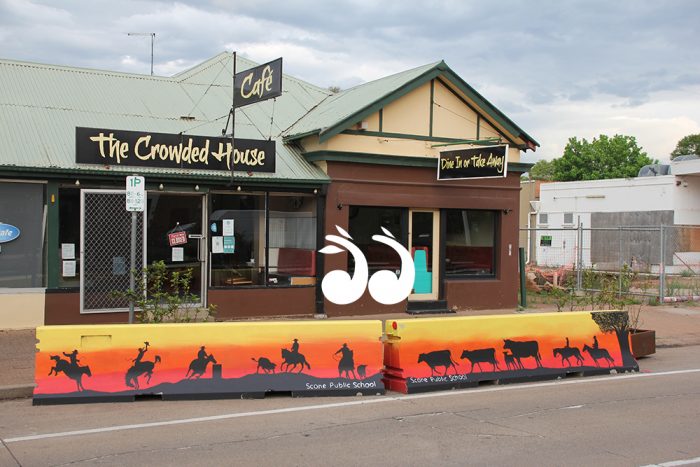 4: The bollards in front of the Crowded House Cafe.