THE Dying with Dignity NSW group held an online forum to canvass the Upper Hunter candidates to discover how they would vote when the Voluntary Assisted Dying Bill 2021 comes before NSW Parliament.

If passed, the bill in NSW would legalise assisted dying for the terminally ill. The NSW upper house debated a voluntary assisted dying bill in 2017. It was defeated by a single vote, 20 votes to 19.

The controversial bill has passionate advocates on both sides of the debate with opponents of the Bill in NSW, with groups such as the ‘HOPE Preventing Euthanasia and Assisted Suicide’ group stating it would pose a very real threat to the disabled, the elderly, those with mental health issues and those Australians, including young people, struggling with suicidal ideation.

“Premier Gladys Berejiklian gave an assurance to her colleagues, in August 2019, that there would be no more conscience votes on contentious social issues this term of parliament,” Ms van der Linden said.

“We are holding her to these statements and are confident that she will not renege on the promise that she made to her party room,” she said.

Question 1: Do you, in principle, support the concept of voluntary assisted dying laws? That is, laws that would permit terminally ill people, at the end stage of their illness, who are experiencing intolerable suffering, to ask for assistance to die, provided that they have decision-making capacity and are not subject to any coercion?

Question 2: If elected as the representative for Upper Hunter, will you vote YES when the Voluntary Assisted Dying Bill 2021 comes before NSW Parliament?

Shane Higson, Vice President of Dying with Dignity (DWD) said, “we soon realised that some candidates who supported voluntary assisted dying in principle weren’t comfortable pledging to support legislation that is still being drafted. As a consequence, our scorecard indicates those candidates who have ‘in principle’ support but may not have answered yes to Question 2. 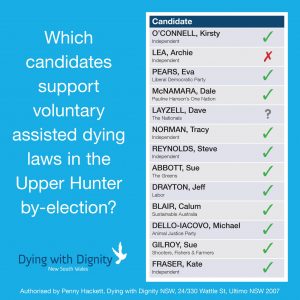 Two candidates, Kirsty O’Connell and Tracy Norman attended the DWD online forum on Saturday 8 May so they were able to give their own responses to our questions. We have included Kirsty’s and Tracy’s original statements and also statements from the candidates who responded to our email.

“I believe this is a question of conscience and compassion – not politics.

I personally have lost loved ones to cancer and have witnessed the suffering that people experience in the late stages of a terminal illness.

In my case, both of my uncles wanted to live – wanted to keep trying for more time with us. That was their choice.

Provided that a terminally ill person has the capacity to make the decision for themselves, is not coerced, and that all appropriate safeguards are in place and overseen by qualified medical professionals, I would support giving people in this position the dignity of a choice.

“I will study the legislation very closely to ensure that all the appropriate safeguards are in place and provided they are, I will vote yes.”

2. Archie Lea – The only candidate to voice his opposition to the bill. Mr Lea is a strong opponent of voluntary assisted dying.

3. Eva Pears – The candidate for the Liberal Democratic Party was the first candidate to reply to our email and it was a “Yes” to both questions. She followed up with this statement –“The Liberal Democrats are committed to enacting legislation to allow all adult Australians the right to assisted suicide, provided there are appropriate safety mechanisms to ensure consent is given freely and confirmed. There is no more fundamental expression of individual freedom than the right to decide what to do with our own body.

While most fair-minded people accept that painlessly terminating the suffering of animals is a humane act of compassion, and this is recognised by the law, the law prohibits the application of the same principle to our own species.

The Liberal Democratic Party, as a party that supports individual rights and freedom of choice, rejects this cruel double standard.”

4. Dale McNamara – The One Nation candidate, thanked us for the opportunity to make a comment on the proposed voluntary assisted dying laws. His statement was:

“My current view is that individuals, in consultation with medical and psychological professionals, should be given the option of voluntary assisted dying, as a last resort.”

6. Tracy Norman – Is another independent candidate who attended the forum. She also gave this response to the two questions:

“In answer to your 1st question, I certainly support in principle. However, I cannot answer the second question without seeing the draft bill and feel that it would therefore be an irresponsible response to answer yes to your second question.

7. Steven Reynolds – Is another independent candidate who called DWDNSW soon after receiving our email. He was very supportive of our issue. When asked to put something in writing he replied:

“As I stated in our call, this is something that I unequivocally support, even beyond the by-election you have my support moving forward on this topic. This for me is not an item to win votes on, but should I not be successful at the by-election, I will be at the ready to assist you in any way I can to advocate for this.”

8. Sue Abbott – The Greens candidate was a definite Yes to both questions but did not provide a statement.

“I support voluntary assisted dying in principle. However, I won’t commit to voting in support of this until I’ve seen the details of a Bill.”

“I am strongly in support of voluntary assisted dying laws. It is the right of the individual to choose. The answers to your two questions are therefore Yes and Yes.”

11. Michael Dello-Iacovo – The candidate for the Animal Justice Party has indicated that he is 100% supportive however did not provide a statement.

12. Sue Gilroy – The candidate for the Shooters, Fishers and Farmers Party provided the following statement –

“As a nurse, this is an area where I do hold a personal view, as I have witnessed first-hand both well managed and poorly managed end of life situations. This is an intensely personal decision to make. If elected, I would support the majority position of my electorate, as a conscience vote driven by the electorate I represent. On this matter, it would be incumbent of me to sideline my personal views on the matter and side with the view of the majority of my constituents.

13. Kate Fraser – Is another independent candidate who also answered yes to both questions. Her statement said –

“I am in favour of choice and I strongly believe that we all should be aiming toward compassionate and humane, end of life options.”

“Four weeks ago I was just a builder. There’s a lot of work that needs to be done around those bills. There’s a lot of organisations that take a strong position on one side of the fence or the other,” Mr Layzell said.

“These are very complex situations and I really need to know how the community feels about it, how the people of the Upper Hunter feel about it,” he said.

“I don’t think it matters what my personal view is, I’m standing here saying I want to represent the people of the Upper Hunter and it’s a  complicated issue. It’s something I need to get my head into to understand because it will be very important for the community.