Drayton’s final plea to the electorate

LABOR’s candidate for the Upper Hunter by-election made his final pitch to the electorate asking for the opportunity to make a difference on their behalf at his Burdekin Park presser this morning in Singleton.

Mr Drayton had a strong showing of coal miners who had come to the presser to lend their support to him and the Labor Party. There are two important commitments Labor wants to secure from the government – the $100 million of mining royalties package reinvested in the Upper Hunter and the Mining Bill.

“You would think if you’d held this seat for more than 90 years, you’d have a bit of an idea yourself of where the neglect lies within this electorate but that hasn’t appeared to be the case these last four or five weeks,” he said.

“There are two commitments the Coalition haven’t come around and haven’t matched us on.  One is the $100 million royalties package put back into the community and the second commitment and equally of importance is the Mining bill that Labor put forward. This is the Mining Bill that supports mine workers.

“Every candidate has talked about the importance of mining but not any of them have made commitments to mine workers. The only party that has made any commitment to mine workers is me and the Labor party. That’s the Mining Bill I speak of that will improve safety and conditions for mineworkers on mine sites. The Mining Bill will also send to jail any mining bosses who are charged with industrial manslaughter. 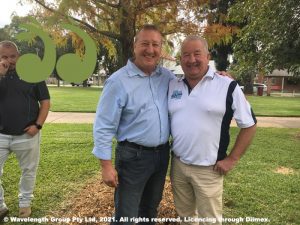 Dennis Edwards, a coal miner and CFMEU member turned out at the park this morning to throw his weight behind Mr Drayton’s campaign.

“Jeff Drayton’s a genuine contender for all the constituents in the Upper Hunter. He represents a cross-section of the community here. He has family here, he works here, he’s always worked here, he has property here and he’s representative of what we all expect here,” Mr Edwards said.

“This election will be close. A vote for the National Party means our region will just keep sending money down to Sydney while getting nothing in return,” Mr Drayton said.

“I’m asking voters to give me a chance, so I can fight for our jobs, our services and our fair share,” he said.