NATIONAL Party candidate David Layzell has claimed an early victory in the Upper Hunter by-election, with the first count showing Layzell securing more than 30 percent of the votes, while it was the lowest vote in decades for the Nationals, it was enough to get them across the line.

“I am very encouraged by the early results, which are a strong endorsement of our platform of protecting local jobs, fixing local roads and building a safer, stronger future for our region,” Mr Layzell said.

“While we still don’t have an official result, I want to thank everyone for their support and if elected I will work hard for everyone who lives in our beautiful electorate,” he said.

Despite positive Muswellbrook numbers, Labor candidate Jeff Drayton was bested by Layzell when it came to Singleton voters.

The Labor Party had a nine percent swing against it, lowering Drayton’s total to 20 percent.

Mr Drayton graciously conceded Labor “always faced an uphill battle” and said the election results are a warning sign for the Party.

“I phoned David Layzell to congratulate him on his election as the next member for Upper Hunter. Obviously, David and I don’t agree on many things but we both have the best interests of the Upper Hunter at heart. I wish David and his family all the best as he starts this new role,” Mr Drayton said.

“The National Party has held this seat for 90 years and we always faced an uphill battle to win it. I was proud of the huge support I received in places like Muswellbrook, Denman, Aberdeen and Sandy Hollow. Unfortunately, we couldn’t replicate those results in the other parts of the electorate yesterday,” he said.

“Our result yesterday, particularly in Singleton, is a warning to Labor that we can’t take any community for granted. Working-class communities are hurting and they’re turning away from this Government. However, right now, they don’t see Labor as the answer. Labor needs to do some real soul searching as to how we will win these communities back. It’s going to take honest reflection and a lot of hard work,” he said.

“For now, I’m looking forward to returning to my role representing mine-workers in this region and enjoying some more time with Susan and the family,” said Mr Drayton.

Kirsty O’Connell proved to be the strongest Independent candidate, receiving 8.6 percent of the total votes and the Greens candidate Sue Abbott receiving 3.3 percent.

Ms O’Connell said she was proud to achieve one primary vote for every 3.5 Nationals primary votes, considering the stark differences between her campaign resources and those of the major parties.

“We did this despite having four weeks to campaign against their seven plus 90 years, $60K against their $290K and 40 local volunteers on Election Day to their 475, which included around 330 brought in from outside the electorate. Fair to say that we punched well above our weight,” Ms O’Connell said.

“In running for this election I always knew that it would be tough to win while having a difficult conversation with the electorate but I felt, and still feel, that having that difficult conversation was incredibly important,” she said.
“As a result, we’ve seen some significant shifts from all of the major parties, including the Nationals and I’ve already had a very friendly and productive opening discussion with our new MP Dave Layzell. I look forward to working with Dave and wish him the very best of luck,” she said.
Sue Abbott said she was disappointed in the absence of media focus on the existential threat of climate change during the by-election, singling out mainstream media outlets, including the ABC, the Australian Financial Review, The Sydney Morning Herald and the Guardian.
“It was a conspiracy of silence I had not expected,” said Ms Abbott.

“The Greens remain committed to implementing a planned transition to a decarbonised economy by all tiers of government,” she said.

The results across booths to date is as follows: 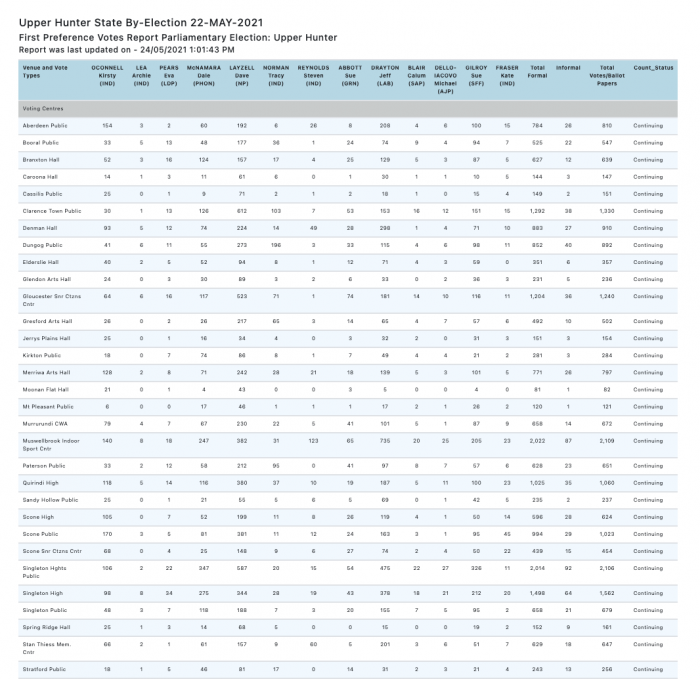 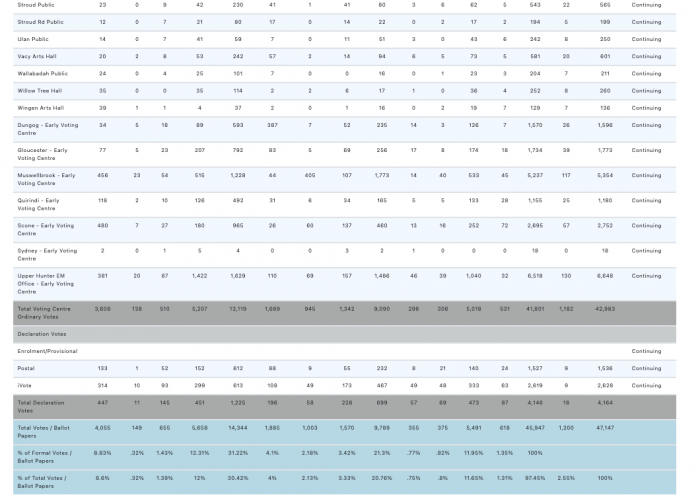