THE time it may take to repair the Merriwa to Willow Tree Road has become a contentious issue within Council, with the Chair of the Infrastructure Committee, Cr Ron Campbell, refusing to allow Cr Sue Abbott to have the question recorded in the meeting minutes.

When the agenda item of the Merriwa Willow Tree Road was raised in the meeting, Cr Abbott asked when the 16 questions submitted by Merriwa residents Lois and Linden Wilkinson would be answered by Council and further asked why the road had been opened in the first place if it was not built to specification and deemed unsafe? 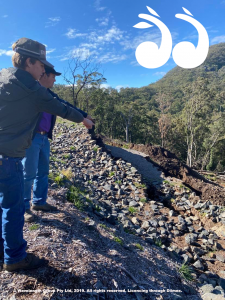 Cr Campbell, cut Cr Abbott off and said, “I’ll just cut you short there, I think those questions will be answered in a confidential and when that they are then decided upon by Council then they will become public, but I think the general manager has answered those questions or given indication, so I think we’ve got to be careful there.”

“This is not the…because there are a lot of maybe personnel and a lot of other questions there, within that…those questions they need to be addressed in the proper forum and then they will be made public and the report,” Ron Campbell said.

Daryl Dutton, resident and former general manager of the Council, said the nature of Council meetings was to discuss matters, debate and ask questions in a public forum, so that the public could understand a range of matters. (Read: Council’s Culture of Secrecy Confirmed and What Is Council Hiding).

“Matters like this should not be being discussed in confidential meetings,” said Mr Dutton.

“There are matters which may involve naming personnel, which can be redacted from a document when it is released, but a geotechnical report is about the integrity of the road and should be publicly available,” he said.

“Matters should be transparent and discussed and debated in the open Council meetings and not behind closed doors and Cr Abbott’s questions under the code of meeting practice are allowed and should be answered on the public record,” Daryl Dutton said.

When Cr Abbott pressed the question on the safety of the road Cr Campbell’s response was convoluted.

“Hang on, the question, that’s quite correct, the question is, but however, we’ve just answered that, that the um, the original road when it’s identified and the geotech, my understanding and I’ll stand corrected on that, when the geotech gives the approval that that particular part of the road can be used, I think that’s where it is,” he said.

“Look I sympathise with the Wilkinson’s but there are quite a number of people and transport has much larger numbers than any of us on that road, so we are impacted,” he said.

“I think we’ve got to wait until we get that proper report done and then we can answer that question,” Cr Campbell said.

While a further report on the road has been commissioned by Council, the Geotechnical Report provided to Council has not been made publicly available. scone.com.au has applied for the report under the Government Information Public Access legislation.

Cr Abbott then asked a second question on the road, “I have one more question about the time it will take to repair the road, because there has been a suggestion it may be three years. Is that correct?” 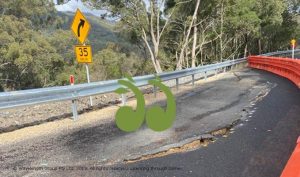 Cr Campbell again cut Cr Abbott off and said, “Hang on, hang on, we’ve got to wait for that report Sue, I cant allow that to go any further, because it has to come from that report and then we will have an indication of how long it’s going to be to restore that road to its proper and original intention. So I think we need to stop at that.”

Cr Abbott then sought clarification that her question would be tabled as being asked in the meeting or if Cr Campbell had disallowed the question.

“No, look I will disallow it because, the point is we’ve answered that and it has to come up from that report and then that will be made public, we can’t just put a timeline. If we put timelines on things and the report is not available then that makes us look very silly,” said Cr Ron Campbell.

“Well I think we do look very silly, with justification,” retorted Cr Abbott.

While Cr Campbell said timeframes could not yet be made by Council, Council’s general manager, Steve McDonald said in a media release on June 22 that, “the load limit will be in place until the road is fixed, which could take up to three years.”

Daryl Dutton said if Council had made a statement on timeframes, based on the geotechnical report, Councillors and the public had every right to ask how that timeframe was determined.