THERE is a confidential issue being dealt with in Council that is defined as a “security” matter. 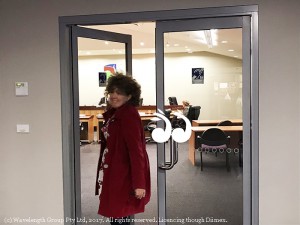 Cr Sue Abbott leaving the Council chambers last night while a confidential code of conduct was discussed. Cr Fisher, Cr Collison and Cr Campbell left through the back door.

Last month the matter was not even listed on the agenda, which breaches standard meeting protocols and four Councillors had to leave the discussion; Cr Sue Abbott went out the front door while Councillors Kiwa Fisher, Ron Campbell and Maurice Collison left through the back door.

This month the same Councillors left the chamber while the remaining Councillors and Council staff stayed in the room for the confidential discussion.

The matter was listed on last nights agenda as “code of conduct” citing Section 10A(2) (f) of the local government act which states it is a matter which affects “the security of the council, councillors, council staff or council property.”

A further report on other agenda items discussed at last nights Council meeting will be published later today.