BEEF Bonanza was held at the new White Park  over the weekend through very windy conditions where 760 students participated from all over NSW.

Vice president of the Beef Bonanza committee, Bryce Whale, was pleased with the new venue and  how the event was attended with record cattle numbers on show despite the drought.

The Beef Bonanza committee promotes the event to attract young people to stay in the beef industry and agriculture generally.

“We have been doing this for a lot of years and it has been a wonderful event this year because of the wonderful facility we now have at Scone,” said Mr Whale.

“The White park arena has been amazing for the event, through the dust storm we had the ability to continue without stopping,” he said.

“We didn’t have to have marquee’s up trying to keep shade on people, it was just a wonderful facility and we really appreciate Scone Council for what they have done to support this event by building this huge event facility that now has such use for everyone in the industry and other users.

“We had about 760 students participating in junior judging and parading over the weekend, about 398 led steers go through the ring and about 45 led heifers through a breeder class, then we judged about 40 unled cattle out at the saleyards in the interactive judging sessions.

“We have had a lot of groups from down south, Lake Cargelligo was probably the furthest from down south, Grenfell, Forbes, Bathurst…….down the coast we had Tuggerah Lakes, up as far as Kempsey, Dorrigo and most of the New England schools have been involved…..Coonamble out to the west, Dubbo and all of those regions have had representatives here over the weekend,” Mr Whale said.

The effects of the drought can not be overlooked but despite the hardship and in the interests of education, the schools have still supported agriculture and supported Beef Bonanza despite soaring costs to prepare the cattle.

“All these cattle are grain fed that have come through this system and that is what has hurt them.

“Instead of buying feed we would normally three hundred and fifty to four hundred dollars for, most of these schools and open competitors have been paying upward of seven hundred dollars a ton for that feed,” said Mr Whale.

“A lot of those schools will not get that back in return but they do it as an education and it’s wonderful the schools will commit to do that for the education of the kids and to support us with record numbers of cattle,” he said.

“The committee is very dedicated to work for youth in agriculture, it doesn’t necessarily have to be the beef industry, we are just all passionate people in agriculture and if we get 50 or 75 kids out of this programme that come back in and stay in agriculture for a lifetime, we have a achieved our purpose.

“Whether they become a university graduate or a jackeroo in Queensland, we have got them in the industry, we need them and we need to keep supporting youth in agriculture,” Bryce Whale said.

For more information on Beef Bonanza go to www.beefbonanza.org.au 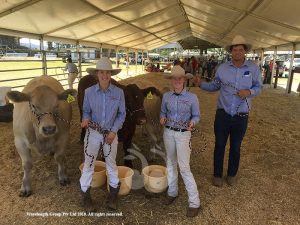