At Home with the Queen’s Cup

SCONE was fortunate enough to be selected for the Melbourne Cup Tour and can now boast it is the home to the Queen’s Cup.

True to form, with understated success, David Paradice carried it into his parent’s home in Scone, in a plastic bag (a nice one) thrown over his shoulder.

David’s dad, John “Doc” Paradice, said he was concerned, if the Queen knew he was carting it about the way he was she may ask for it back, listing several locations he had seen it appear.

scone.com.au was fortunate to get a photo of the Queen’s Cup at John and Bobbie’s home in Scone, before it was taken to Ellerston, where it will remain until the next tournament.

David confirmed Scone would be entering a team again next year with James Harper the English polo captain, Nicolas Pieres from Argentina and Ollie Cudmore who was born in Tamworth and comes from Quirindi. 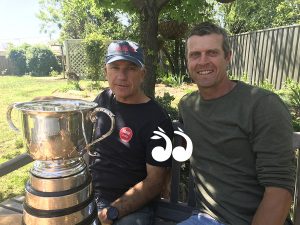 David Paradice with James Harper at home in Scone with the Queen’s Cup.

“It’s the first time its (the Queen’s Cup) has been in Australia,” said David Paradice.

“We did take it down to Garangula, near Harden, but now it will stay at Ellerston, until we have to hand it back,” he said.

James Harper, was also in town on the weekend to play at Ellerston and said he enjoys coming back to Scone.

“We do about four or five tournaments, travelling around Sydney, Canberra and here and one in Melbourne,” he said.

“With the two seasons in Australia I come from October until November and then March and a bit of April.

“I have done one or two stints where I have done six months, we love it here,” he said.

David said James had been a valuable player for the Scone side and they were looking forward to next year’s Cup.

“He was most valuable player in the tournament and he rode the champion pony, which subsequently was sold to the Russian guy we competed against and it was sold for £250,000 which is quite a lot of money for a polo pony,” said David.

James added with a smile, “he’s hoping the horse may make a difference.”

While many of the teams in the Queen’s Cup had strong financial backing, the strength of the Scone team stems from local connections to Ellerston.

“There is a Russian guy who put massive amounts of money into their team and there is an Italian guy and some French guys who put a lot of money into it,” said David.

“There are two guys who are the top players in the world Facundo Perez and Adolfo Cambiaso, but his brother plays with us, Nicolas Pieres,” he said.

“All of the Peires family have played at Ellerston over the years,” he said.

“Their father used to play for Ellerston and he was off 10 goals at the top and there are three sons and they all play off 10 goals,” he said.

“They all play hard against each other on the field,” David Paradice said.

John Paradice, said his son had always had a passion for horses and he was thrilled when the Scone team won the Queen’s Cup . 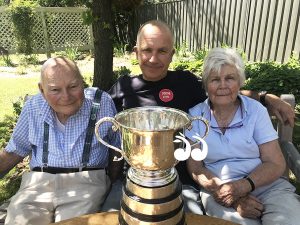 “It’s very thrilling and seems to be quite a thing for the locals here to know about Scone being put on the map by a local boy and I haven’t met anybody in Scone who was not supportive,” said Dr Paradice.

“He’s been interested in horses, ever since a year after his higher school certificate and spent a year at Widden, he’s always been interested since a young child, I think possibly it has given him an understanding of animals and he knows how those animals should be treated and always seems to have a good outcome,” he said.

“He’s always loved riding and once he started to do well in business he became more interested in thoroughbreds and he was buying lots of race horses; but I think it wasn’t interactive enough for him and someone asked him if he’d be interested in giving polo a go, so it’s probably been 15 years since he has been playing polo,” said John Paradice.

Bobbie Paradice said she loves seeing how much David enjoys playing polo and was pleased he had been surrounded by so many supportive people when he first took up the mallet in this 40’s.

“He’s always loved sport, it didn’t matter what, he loved it and people,” she said.

“I think he benefits from this participation in polo more than anything else he has done,” she said.

“It’s been good for David, he has quite a lot of stress, but polo is a thing that when you are doing it you can’t think of anything else, you have to be completely focused.

“He was a natural and loved his pony ever since he was little, he never went to pony club, he just played around in the paddock.

“He was very lucky with the people he started playing with, they were very good to him.

“He’s been well looked after by people from Ellerston and when he began Matt Grimes used to ride along behind him and if he missed the ball, he’d be there to hit it,” she said.

“I just think he is doing what he loves to do and he loves it so much,” Bobbie Paradice said.