WHEN the Victorian police are called out for an emergency response involving someone with a mental health issue, Geoffrey Ahern goes with them.

Geoffrey is a clinical nurse specialist in mental health and loves his job because he can make a difference to people with mental health issues in emergency situations. 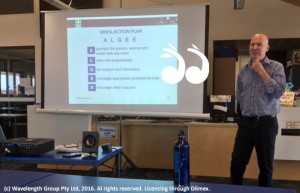 He is also inspired by the activities of the Where There’s A Will Foundation in the Upper Hunter and was recently here to train 30 local school teachers in youth mental health first-aid.

“The course is designed to recognise the signs and symptoms that a person is struggling with their mental health, or how to recognise a person in crisis, so that could be someone who is suicidal or self-harming or maybe psychotic such as unwell with schizophrenia,” said Mr Ahern.

“The idea is they then feel confident to help or support them until you can get them linked in with the right kind of professional help or until the crisis resolves; so in its essence it is about helping them to recognise and feel confident to do something,” he said.

“For example with eating disorders sometimes the signs and symptoms are really subtle it might be a child who you never see eat at school or you notice a bunch of students looking at a calorie counting app on their phone, the earlier we get any mental health diagnosis the outcomes are just so much better and it’s so much easier to treat as well and teachers are in a key position to recognise it,” Geoffrey Ahern said.

Geoffrey said he has lost count of the number of teachers he has trained who have told him they have been able to identify youth at risk and intervene before suicide and they also report their own mental wellbeing improves because they get to better understand themselves.

The training at St Joseph’s was so successful Pauline Carrigan from Where There’s A Will has invited Geoffrey to return and train 30 local men who are involved with sporting groups, which Geoffrey was excited to accept.

“I was over the moon when Pauline rang and told me that because my passion is challenging masculinity in this culture and the damage it can do to young men that they just don’t talk, it is just terrible,” said Geoffrey.

“It will just be with men involved with sports, so we can really get stuck into talking about masculinity and how particularly older men can be mentors and help younger men within sport, that it’s ok to ask for help and it doesn’t mean you are weak which is exciting,” he said.