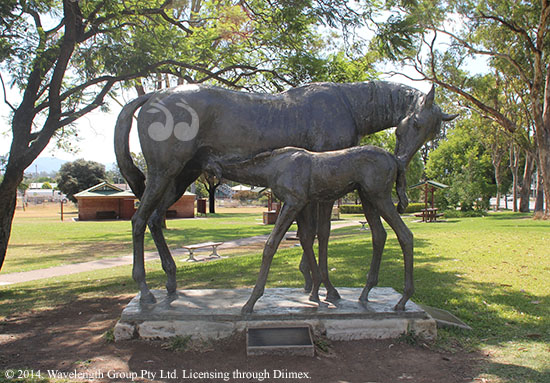 The Mare and Foal sculpture by Gabriel Sterk in Elizabeth Park, Scone.

The most photographed mare and foal in Australia would have to be the beautiful Gabriel Sterk bronze sculpture in Elizabeth Park, Scone.

The Mare and Foal, fixed to a six tonne foundation, was unveiled by the Hon Eric Bedford MP, in Elizabeth Park on March 3, 1982.

The sculpture cost $65,000 and a time capsule is buried in the Park which lists the donors and history of the Sculpture.

Unfortunately the prototype of the sculpture, to be used for fundraising prize, was not fixed to a six tonne foundation and was stolen.

Another prototype was ordered at additional expense to fundraisers; the original has never been located.1

History of the sculpture

David Archibald put forward the idea of a horse sculpture in the Park, to the Scone tourism committee in 1979 and a competition was held to find a suitable sculpture.

Fundraising for the sculpture was slow due to a drought, but a $5,000 grant from Premier Neville Wran helped the project gain momentum.

Adelaide based sculpture Gabriel Sterk took it upon himself to start work on the sculpture before the funds had been raised.

He said the sculpture would be ready by August 1981 and if the committee had not raised the money he would sell the piece overseas.

To secure the sculpture, eight local people took out a bank loan in November 1981 and the Mare and Foal was collected from Adelaide.

David Archibald and Cr Herbie Phelps made the pilgrimage to Adelaide to transport the 1.4 tonne sculpture to Scone, appropriately loaded into a horse float.2

Fundraising efforts continued for years after the sculpture was unveiled, culminating in a ball on May 15, 1987, which raised $20,000.3

The Commonwealth Bank made a significant financial contribution to the fundraising effort as a gesture of goodwill to the people of Scone.4

Local girl, Margaret Coombes was the first to ride the mare, at the unveiling.5

On the morning of the official unveiling, residents were shocked to see a worse-for-wear fibreglass Appaloosa taking pride of place in Elizabeth Park.6

Three masked men who were spotted acting suspiciously in the Park in early hours of the morning, are suspected of wrangling the horse from a local property north of Scone.

The real Mare and Foal was safely housed at Alan Atwill’s ‘Redbank Stud’.7