Kingdon Ponds was the site of the earliest settlement in the Scone area, with the first pioneers gravitating to the water source. It is a perennial stream rising from the Warland’s Range, approximately six kilometres south-east of Murrurundi and flows generally south for 40 kilometres, joining the Dartbrook, two kilometres west of Aberdeen.1 The first settlement was Redbank, on the western side of the ponds. When the route for the Great North Road was marked out, the population shifted to take advantage of passing trade and the current township of Scone was developed.

The earliest reference to Kingdon Ponds is marked on a map by Henry Dangar following his survey of the area in August 1824. Research by local historian Nancy Gray indicates there is no written account of Henry naming it Kingdon Ponds, but points to four missing days in his field book in August during his surveying that coincide with the time he was in the area of Kingdon Ponds and Dartbrook. The map however, does trace Dangar’s trip and has dates written on it:

“On that map were written Kingdon Ponds, Dartbrook, Holdsworthy Downs on it is marked Tooloogan, though it is spelt Tuligan; That is the only record of the first exploration of Scone and the Kingdon Ponds Valley…”2

One thing that has been consistent is people questioning if Kingdon Ponds was actually meant to be Kingdom Ponds and was misinterpreted. The map indicates it is spelt with an “n”, and the Ponds are likely to be named after Dangar’s wife’s family, who were Kingdons.

“Henry Dangar’s wife was named Sibly; when he reached the head of the Dartbrook he found a massive mountain which he called Mount Sibly. It is not Mount Sibly now, but it is marked such on his original map. On the genealogical library are records of the Cornwell Parish Registers that go back to the 1600’s, and in them there are the records of the Dangar’s marriages. The Dangar’s married the Sibly’s and the Sibly’s married the Kingdons, and all the Dangars ancestors were either Silbys or Kingdons. Although we may never be able to prove it, I think in the circumstances we have the reason for the naming of this fair valley in which Scone nestles the Kingdon Ponds.” 3 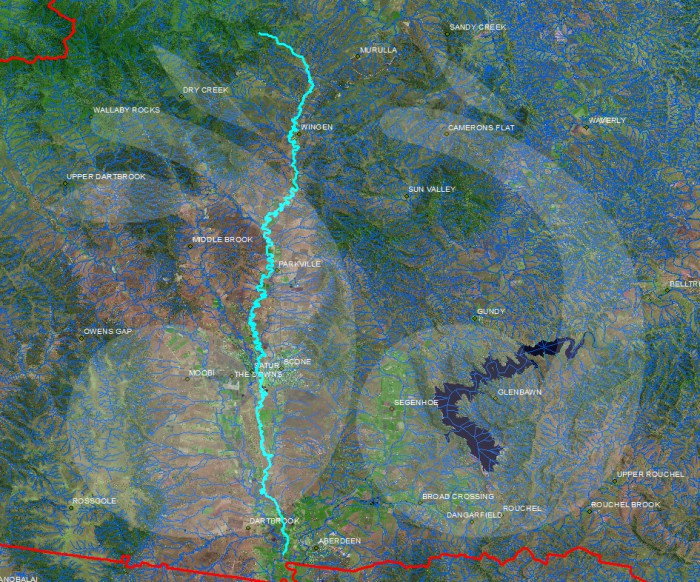 Topographical map of Kingdon Ponds, courtesy of the Geographical Names Board of New South Wales.