FORMER Prime Minister, Malcolm Turnbull has thrown his support behind independent candidate Kirsty O’Connell in the upcoming by-election, which has drawn claims of “treachery” from John Barilaro.

Kirsty and Malcolm are aligned in calling for a plan for the future of the Upper Hunter and their view that the National Party has let down farmers for decades.

Malcolm has said John’s claims of disloyalty are laughable and Kirsty has challenged John to a debate on the future of the Upper Hunter before the election.

Kirsty said she met Malcolm and Lucy through their support of the Aberdeen campdraft and said she has found Malcolm has always been willing to listen to and support the local community.

“Malcolm, through his East Rossgole Pastoral Co donates all of the cattle to the Aberdeen campdraft and he is actually the reason why we still have an Aberdeen rodeo ground because the State was trying to take it off us at one stage and…at the time he gave us free legal advice which meant that the community got to keep that facility…so I knew of him through that,” explained Kirsty. 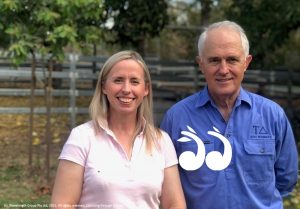 “We met with Lucy and Malcolm to show them how the area has changed over the last 20 years…we’ve actually opened six Adanis worth of production in the immediate area surrounding Muswellbrook alone in the last 20 years…and there are proposals to have another our Adani equivalents this year…and yet the government does not want to have a discussion,” she said.

“Malcolm to his credit is the only politician I know who has been prepared to burn some of his own political capital to make sure that we finally get to have the conversation that the community has been trying to have with the government for years,” Kirsty O’Connell said.

Malcolm Turnbull had high praise for Kirsty as one of the most impressive candidates he has met and believes she would provide a strong sensible voice for the people of the Upper Hunter.

“I’ve met a lot of candidates in my time, as you can imagine, I’ve never met a first-time candidate who has hit the ground running as capably as she has, she would be a fantastic representative for the people of the Upper Hunter,” said Malcolm.

“Kirsty believes the government should be developing a plan with the community for the future of the Upper Hunter,” he said.

“She is the independent candidate that is going to treat the Upper Hunter with the respect it deserves and the position she is putting is that the community deserves to be respected and protected,” Malcolm Turnbull said.

In response to John Barilaro’s claims of disloyalty, Malcolm Turnbull said it was laughable.

“For Barilaro to talk about loyalty is laughable, he’s never felt constrained in feeling he has to support Liberals, he opposed the Liberal candidate in Eden Monaro, he called on me to resign as Prime Minister in 2017 working with Alan Jones, he’s threatened to blow up the Berejiklian government on numerous occasions, there is no individual in New South Wales who has done more to destablise the Berjiklian government than John Barilaro,” said Malcolm Turnbull.

“The only political party obligations I have are to the Liberal Party, I certainly don’t have any obligations to the National Party, he said.

“For him to talk about loyalty is laughable, I’m not even a member of his Party, but he’s not loyal to his own party and he’s certainly not loyal to Berejiklian!

“Farmers have been telling me for years the National Party no longer represents them, all too often independents win country seats and that is why,” he said.

“If I was on the electoral role in the Upper Hunter, I certainly wouldn’t be voting for the Nationals, I’d be voting for Kirsty O’Connell,” Malcolm Turnbull said.

Kirsty O’Connell is also incensed by Barilaro’s treatment of the Upper Hunter and has challenged the Deputy Premier to a debate before election day.

“I can’t not fathom how John Barilaro has the time for schoolboy pranks and bunfights with Malcolm Turnbull and yet he doesn’t have the time to make a plan for the Upper Hunter,” said Kirsty.

“Malcolm has said a lot of very reasonable things that the community of the Upper Hunter has been saying for years, but John Barilaro doesn’t listen to the community, he only listens when Malcolm Turnbull says something,” she said.

“I would like, while he still has an interest in the Upper Hunter, brought about by the horrible behaviour of his own MP, I would like him to come and debate me on this issue and I want to debate him, not Layzell, because I want to the butcher, not the block,” Kirsty O’Connell said.