Filed in Just In by Elizabeth Flaherty March 4, 2020

“I was reading the business paper and thought ‘who’s this Adam Watts and why would they name an International Women’s Day Award after a man?!” said Lee Watts.

Update: Due to the coronavirus pandemic the inaugural oration has been postponed.

“So I kept reading and saw it was named after Bev Adams and I thought well that is incredibly well deserved and then saw that I was the Watts they were referring to,” laughed Lee as she recounted to Bev Adams, how she learned of the International Women’s Day award had been named in their honour.

“Hopefully it inspires other women to get on Council and do what we’ve done,” said Lee.

“Exactly, because we need more women! I know I tried and often it was very difficult,” said Bev. 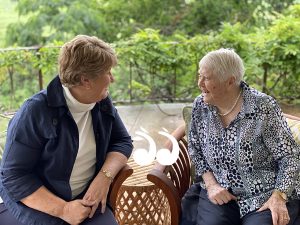 LOCAL TRAILBLAZERS: Lee Watts and Bev Adams caught up and talked about the importance of women in local government.

Both Lee and Bev agreed women often see their role on Council differently to men, but their perspective is needed to represent women in the community.

“By having more women on Council, it makes for some good conversation and good outcomes, I’ve been passionate about community services, what so many people in our area need and putting some money there,” said Lee.

“The big issue is how do we encourage women to go on Council, when they see the small amount of women who are on Council?” questioned Lee.

“I think you can’t encourage them, it’s got to come from within and it’s something that is going to happen, but it’s not happening in a hurry,” said Bev.

“As a woman you tend to get all of the blame, but none of the praise and that is it, simply put!” said Bev.

“I also think women do so many things, and while they might not be on Council they are often the backbone of other community organisations,” said Lee.

“Yes, like the CWA and so many committees,” said Bev.

“If we can encourage women in those roles to go to the next level, because there are women out there on 10 and 15 committees, who are running them and we need those women to be part of Council,” said Lee.

“When I was the Mayor we had five women and four men, so we had a majority female Council, it was great and it can happen!” said Lee.

Both women have a raft of stories about the challenges of being a woman on Council, but both remain passionate about the importance of more female voices to change attitudes.

Lee recalled going to the first meeting of all the Mayors in New South Wales, “only Mayors were invited, we didn’t have our partners there in the room with us and yet another Mayor came up to me and asked ‘where’s your Mayor?'”

At 88 years of age, Bev lamented that she won’t live to see the equality of women, but firmly maintains, “it will happen!”

“They don’t have to be grey haired old men! You can be on Council, while you are working and doing other things,” said Bev.

Lee agreed, “I wasn’t quite 40 when I became Mayor and still juggling work and life.”

“Well yes, 40 is quite young compared to most Councillors, but we need more young people,” said Bev.

Both women shared stories of their frustration at the sexism they have both encountered personally and what they have witnessed.

But both have cracked the glass ceiling and hope more women will follow.

Update: Due to the coronavirus pandemic the inaugural oration has been postponed.

« Rainfall in the Last 24 Hours
Editorial: Questions for Scone’s Stupidest… »