scone.com.au
MENUMENU
InstagramTwitterFacebook
Recent News > Touching Base with Past Patients

Touching Base with Past Patients

THE exceptional people who are part of the Westpac Rescue Helicopter service have dedicated their lives to helping people in our community during some of the worst moments of their lives and while that is the job they are dedicated to doing, they really love the opportunity to connect with patients after they are back on their feet.

With so many dark moments throughout their own days, day after day, to have some bright moments makes a huge difference to them and can also be part of the healing process for the people they have helped.

Emergency service workers can no longer follow up patients to find out if they are ok, so each year the Westpac crews put on a morning tea and invite everyone they have ever helped to come and have a cuppa with them at their bases in Blemont, Tamworth and Lismore. See the details for the morning tea on November 3 below.

Scone resident, Karen McDonald, has remained in touch with the crew which saved her newborn baby and was not expected to survive, Graham Nickisson, the crewman who made the brave call of diverting the chopper to baby Danielle is such a part of their lives he walked Danielle down the aisle at her wedding.

Karen said the impact of connecting with the crew after a life changing trauma can’t be underestimated for both the crew and the people they save.

When Danielle was one year old I had to take her down to the Mater for a check and while I was down there Martin Rowley who was the head of newborn intensive care, children’s intensive care and cancer unit, said to me ‘can you do me a favour today?’ and I said, ‘sure anything!’

And he said, ‘the helicopter boys bought a young child in today, who had drowned and unfortunately when they got the child to the hospital it was a live, but passed away just after they got there, so they are all extremely upset and down in the dumps about it.’

He said to me, ‘would you mind taking Danielle down to the helicopter base so that they can see her and see how happy she is and how well she is and it’s due to their efforts?’

So we went down there and they were just over the moon and they sat on the floor with toys and played with her for hours and just let her wander around and they even said, ‘this is just what we need today, we need something really positive because we’ve had a terrible tragedy

It’s hard for them to lose anyone, but to lose a child is just devastating, so to see a child who was so sick and there was only one drug left to try to save her, a year later with no brain injury, no disability, eyesight is perfect and toddling around, to them was nothing short of a miracle.

I’ve always said that ‘I gave birth to her, but they gave life to her’. 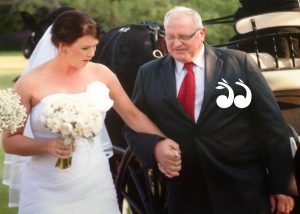 Danielle talking Graham’s (Nicko’s) hand to walk down the ailse on her wedding day.

They love to see everyone and it’s amazing how many people they do remember.

They may not recognise your face, but the minute people say their name and where they come from, it takes them straight back and they know exactly who you are

They love people coming back to see them and they also love to see the ramifications of saving their life, like they’ve got children, or grandchildren, or they got married, that to them is a life story and a continuing one

There are a lot of people in services and ambulance services are included that end up with post traumatic syndrome because of what they see on a daily basis and these guys, I mean you have to hand it to them and to have a happy day where they can come out with a really positive outlook and a live patient, it’s phenomenal and it can outweigh the bad.

Graham with Danielle’s babies Claudia and Elanor at the Westpac Rescue Helicopter base.

Karen was also keen to point out the work of local ambulance who are also impacted by the work they do and rarely get the chance to find out what happened after someone has left their care. For the record, the Scone crews love any kind of pastries, cake and really…they will demolish any food.

Richard Jones OAM, chief executive officer of the Westpac Rescue Helicopter encourages people who have used the service to come to their morning tea.

“For many people, meeting and talking with Service staff, crew and pilots also helps them in the recovery process. For others, it’s a way of connecting with people who have been in similar situations,” Mr Jones said.

« Mustangs Of All Description Gallop In To Scone
Letter: Call for Thorough Independent Review »