scone.com.au
MENUMENU
InstagramTwitterFacebook
Just In > Timely reminder for locals get the covid vaccine

Timely reminder for locals get the covid vaccine

Filed in Just In by Elizabeth Flaherty June 9, 2021

Dr Richard Abbott has issued a timely reminder to locals get covid vaccine, following a covid positive case in Queensland which has resulted in public health alerts for many country towns in New South Wales.

“The risk for covid in our community at the moment may be low, but we also know from the Melbourne cluster and others springing up, the potential is still there for an outbreak and we know there are other variants emerging, which can be more contagious and cause more severe illness,” said Dr Abbott.

“So we are going to be living with covid for the foreseeable future and we’re all susceptible, so the vaccination really is critical,” he said.

“Unfortunately, with complacency, there is a dropping in standards of prevention, so we are already seeing an increase in the flu, because people aren’t maintaining their social distancing, not wearing masks and handwashing has fallen, so we know the viruses are there and they’re coming back,” Dr Richard Abbott said. 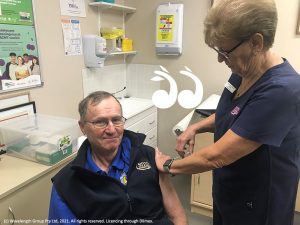 Dr Richard Abbott and nurse Debbie Phelps have had their covid-19 vaccine and encourage everyone to do the same.

More than 1,200 doses of the AstraZeneca Covid-19 vaccine have been administered to Sconeites, including to nurse Deb Phelps and Dr Richard Abbott, who agree the injection is much better than covid-19.

Deb Phelps who has been running the covid-19 vaccine clinics at the Scone Medical Practice encourages more local people to take advantage of their access to the AstraZeneca vaccine and said the Practice is working to get the Pfizer vaccine as soon as possible.

“We’ve administered more than 1,200 doses, average three to four clinics a week and also have weekend clinics for people who can’t make it during the week,” said Ms Phelps.

“I’ve had it and I was fine, I wasn’t unwell, I had a sore arm for a few days, but no fever or anything else,” she said.

“We haven’t seen any issues from the vaccine, a couple of people have had a fever, but that is all,” she said.

To people who are delaying having the vaccine, Debbie said, “please come and have it done, the disease is worse than the injection.”

“If you do get some mild symptoms, a couple of panadol, rest and fluid, but if you do get more severe symptoms contact the ambulance, hospital or your general practitioner,” said Dr Abbott.

“If you do get symptoms, it is your immune system recognising a foreign protein and reacting to it, so it’s actually a normal and expected reaction,” he said.

“People should also get the flu vaccination as soon as they can, but you need to leave two weeks between the covid vaccine and the flu vaccine, that’s not because there is any interaction, it’s so that if there is a reaction we have a better idea of which vaccination they are reacting to,” he said.

Initial overseas data showed 4 in 1 million people may develop a rare type of blood clot associated with the AstraZeneca vaccine. The initial fatality rate was one in four, however the fatality rate overseas has lowered to 10 percent of people who develop the rare clot. 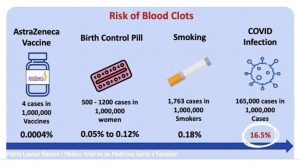 Putting the risk of blood clots in perspective.

“People have been worried because it is a new vaccine and they have been waiting, but there have been millions of doses given overseas, in America and the United Kingdom and many other jurisdictions, so we have a fairly good handle on how many people get clotting and the AstraZeneca, but it much, much lower than the risks from smoking, or taking the oral contraceptive pill,” he said.

This particular clot is a very specific clot, it’s not related to people who’ve had deep vein thrombosis or pulmonary embolism or other more normal clots, it is quite unusual and the risk is much, much lower than if you have covid.

Don’t drop the ball on hygiene

“One thing covid has taught us is very basic hygiene methods are really effective, but we do get a little bit slack on our handwashing, but it is transmitted by touch and there is an aerosol transmission, so masks are important if covid becomes more prevalent,” said Dr Abbott.

“Doctors routinely wear masks for hours often under quite intense situations and doesn’t effect their functioning at all and there is no evidence they cause us to retain carbon dioxide, but there is evidence they stop transmission and decrease your risk of getting covid,” Dr Richard Abbott said.