THE Aberdeen Jockey Club was founded in 1898; down through the years suffering a number of setbacks, including three floods, the first in 1913, the second in 1955 and the one that finally ended horse racing in Aberdeen was in February 1971.

It is near on thirty years since the Aberdeen club last unfurled its flag at the pretty Riverside racetrack situated in the bend of the Hunter River at Aberdeen. 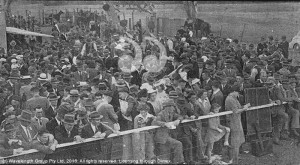 Long gone are the times when quietude and lethargy gave way to the pounding of hooves and raucous and staccato voices of the men supporting their satchels, those were the good old days, the roarin’ days when the ’Deen boasted one of the most progressive race clubs in Northern N.S.W.

Although we are in the year 2000, and the past seems a long way from the present, a cursory glance through memorabilia will revive memories for the younger of the district whose parents and grandparents were involved when racing was at a pinnacle in “Tiger Town.”

Sportsmen and women, like good horses, go the way of all flesh, but the long list of some familiar names still find their place in the treasure-trove of local racing history.

The name Fleming will be remembered and Tom Fleming was a doyen among judges, his verdicts still unchallenged.

Likewise Tom Gallen, whose deft fingers and clear vision enabled him to carry out the important post of timekeeper.

He and his old gelding, Ogo, will be recalled, the old horse must have known every blade of grass on the Aberdeen track, regulars losing count of just how many times the old fellow negotiated the undulating, yet safe surface.

Arthur Hardy in the Secretarial chair giving a hand to welcome all and sundry.

Arthur was a prince in the game, many times filling in as judge for the Scone club in its fledgling years.

The name Day is closely related in all aspects of sport in and around Aberdeen, and a stroll through the paddock finds Roy Day, who holds his hand up in racing—just cannot recall the many charges that passed through his hands.

Harry Oaks, whose success with Allunga, Flying Knight and Co., are well known, while Tom O’Brien would have mirrored the days when he had a hand in Aberdonia and Coruena, both consistent and brilliant gallopers with whom Scott Johnston and “Toss” Gardiner likewise, had a big hand in.

Scott Johnston was always on hand and with him a string of no less than six horses, among them Kinetic, Ruby Queen, Willie Ploma and that slashing mare Blue Tilly, who had a sequence of six wins (three doubles) at meetings between Armidale and Newcastle, all in the space of eight days.

Frank Whyte, from out Tooloogan way was right in his element, keeping with his consistent support of the club, with his charge Our Voyage, a many times winner on the course.

Sid. Whitehead, it was that honest and great old mare, Mater, that made the old gentleman famous, and in her many triumphs Aberdeen supported her to a man.

The mare and Ogo were for many years the idols of the local racing fans.

Others who frequented the track in those days included, Les Haigh of Rogilla history, who received his “leg-up” at Aberdeen, like many other successful mentors of the day.

Frank Cronan, whose bold galloper Pandora reached grand heights, even to the downing of the mighty Beauford, when the champion was in his heyday.

Albert Hussey and the Sevil boys were regulars and with Jingo Joss and Ann Bolynn carried off more than one well-placed plunge.

Then there was the Alford Bros., with Ruby King, Rorie Queen, and lesser lights.

Jack Almond, over from Denman, always had a handy one.

Bill “Chummy” Gardiner, who kept the best of them striding at their top with his more than useful gelding, Longmark.

Last, but not least Charlie Fittock, official and owner, Albert Friedman of Wingen and Tom O’Donnell, of Scone, Jim Sweeney and Dan Perkins who plied their calling as bookmakers for many years, later their places taken by Ernie Marks, and his second-lieutenant, Arthur Fox.

The Aberdeen Race Club was always blessed with a host of top committeemen, as well as members and supporters.

It was the manager of the Aberdeen Meat Works, from 1924 to 1954, Lou Davies, who is credited with putting the club back on its after the First World War.

Not only was he President for many years, but also ran his own string of good horses trained by Eric Cribb.

Such was the strength of the committee, Aberdeen businessman Mr. Arthur Taylor served as treasurer for 32 years, later becoming the club President.

The club ran meetings, three or four times a year and was able to race through the Depression years because of the constant employment at the meat works.

During the early nineteen-forties the Aberdeen club hosted several meetings for the Scone Race Club before the local club settled into White Park.

One such meeting was held on November 11, 1944, resulting in Valiant Hero, trained at Scone by Scott Johnson, winning the Scott Memorial Hospital Cup, run over seven furlongs.

Another feature of the meeting was the dual success of Red Kennel in the Maiden and Probationers Handicap, the gelding prepared at Aberdeen by Jerry O’Brien.

The best performance of the fixture however, went to Jungle King, the brown son of Harinero, landing the Nurses Handicap over six furlongs, with the steadier of 11 stone (70kg), which included 42lb (19kg) of dead weight.

Over the years, if there had to be a highlight singled out for mention on the old track, it probably would have occurred on a Saturday in September 1950. A memorable day for Scone apprentice, Ross Snowden, who rode a double hat trick.

The young horseman riding all six winners on the program, four of these for his “master”, Scone trainer Scott Johnston.

It seems ironic that the Aberdeen track should become the scene that almost cost Ross Snowden his life.

It was on this course with its famous “dip” that almost claimed the life of the Scone horseman, when three horses came down in a sensational fall.

The year was 1952, and the fall occurred as the field was about to come up out of the “dip”, a furlong and three-quarters from home.

For no apparent reason, Snowden’s mount, Deep End, crossed his front legs and fell heavily, in a flash, Pacobah, (N. Bell) and Gay Cup (K. Clement), were over the top of the fallen horse.

Clement was unharmed, with Bell suffering a hip injury.

The head injuries sustained by Snowden were substantial, and left him in a coma for several days.

Ross Snowden lived in Singleton up until his death a couple of years ago, often recalled the fall and his close brush with death.

The devastation caused by the 1955 flood left the track and the amenities in complete ruin, but after a long idleness and with plenty of voluntary labour, racing at Aberdeen resumed on May 2, 1959.

With a new President, Mr. Arthur Taylor in charge, the two Vice-Presidents, Mr. J.P. Fleming, then 89 years of age and Mr. W.R.D. Stephens, 82, said they had not seen a better meeting.

It was Scone trainer Scott Johnston and Merriwa grazier, Mr. G. Horden, who scooped the pool at the meeting, winning the Aberdeen Cup with Pitlochry, ridden by Scone horseman, Martin (Herbie) Everleigh.

Pitlochry’s full-brother; Lord Stranrear was successful in the Corinthian Cup for the same connections.

When the Aberdeen Club held its New Year race meeting on Saturday, January 9, 1971, little did they realise that this was to be the final outing on the old track, with the floods that arrived some weeks later laying it to rest forever.

By all reports the meeting was well attended with winners coming out of the stables of Wilf. Barker, Ron Englebrecht, Reg. Fletcher and Roy Hinton.

Crown Prince was successful in the Aberdeen Handicap for Scone owner/trainer, Tom Easy Secret Tom, racing in the colours of Gloria and Stan Wicks won the final event on the old track, the gelding prepared in Scone by Tom Ollerton and ridden by the trainer’s brother, Jim.

Looking back over the history of the Aberdeen Race Club, it is not hard to imagine why those who still remember, speak of the old track, its committees, supporters and competitors with pride, horse racing in days gone by kept communities together, acting as a meeting place and leisure outlet.

There is no doubt that down through the years the people of Aberdeen, who have copped their share of hard knocks, had looked to their racing for a lift, but sadly through the elements and various other reasons, Aberdeen, like so many other smaller country race clubs have hauled down their “flags”, never to be hoisted again.