Snow has Fallen on the Tops

AT approximately 5pm this afternoon the snow fell at Tomalla on the Barrington Tops. 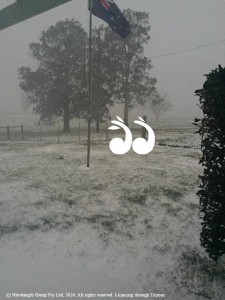 The first snow has fallen at Tomalla on the Barrington Tops at approximately 5pm today.

Cath Payne said the sky had cleared and she had decided to feed the cows when the weather turned and the snow fell.

“I was out feeding the cattle because the sun was out and then I just got hammered,” she laughed.

“It’s moving pretty fast, so I don’t know if there will be much in it,” she said.

“It’s very unpredictable, so who knows what we’ll wake up to,” Cath Payne said.

Today the small schools sports carnival was held at Belltrees and Cath laughed that they nearly lost the tent and all of the people hanging onto it with the wind gusts.

The Bureau of Meteorology said this afternoon Scone recorded some high end gusts of wind which were approximately 80 kilometres per hour, but the worst of the weather will pass in the next two to three hours.

The weather is forecast to clear tonight and tomorrow will be cold and there will be a moderate wind, but it will be mostly sunny with some cloud about.

The Bureau predicts that any snow which has fallen may have already begun to melt and it is unlikely people will see snow tomorrow.