WINNING one Premiership is hard enough but backing it up the following year is far from easy. The Scone Thoroughbreds First Grade and Ladies League Tag have managed to achieve this following good wins at Scone Park on Saturday.

The Ladies League Tag started the day and were up against fierce rivals Murrurundi. There was a strong wind blowing and the locals chose to use it in the first half. This appeared to be a good move after they scored two tries in the first half for the early 8:0 lead. Murrurundi however bounced back with a converted try of their own to narrow the gap to 8:6. Near the halftime bell, they crossed for their second try to take the lead 10:8.

There were plenty of nervous Scone supporters remembering how well Murrurundi had used the wind when they defeated Scone some weeks earlier. Clearly the locals had a good ‘rev up’ from Coach Sofie Casson at halftime, as a more committed team showed their wares in the second half. Scone kept the Murrurundi team scoreless, while they crossed for two additional tries, one of which was converted for the final winning score of 18:10.

Coach Casson was ecstatic with the win – her fifth premiership and fourth as Captain Coach – “we knew Murrurundi would be all out to get the better of us today – we didn’t have a great first half, but our focus and effort was much better in the second half and good enough for a win. Credit to Murrurundi for testing us all the way – massive congratulations to my girls.” 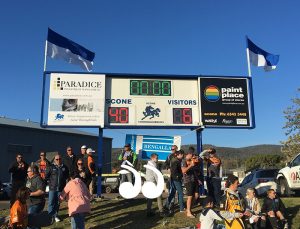 The final score board at the 2019 Bengalla Group 21 first grade grand final.

The First Grade had the undefeated Scone team taking on arch rivals Aberdeen. Scone were down a couple of their key players however remained confident of a strong showing. That confidence was evident from the commencement of the go with a try within the first minutes of the game setting the scene for the game to follow.

Scone had a comfortable lead 24:6 at halftime. Aberdeen’s chances were not improved when one of their players was sent from the field in the second half. Scone maintained the pressure and ran out convincing winners 40:6

Coach Aaron Watts was very proud of the team’s efforts – “we had to make some adjustments with the loss of our Captain, Daniel Ritter for the match. The whole team lifted however and wanted to ensure their efforts throughout the year would not be ‘wasted’ by falling at the last hurdle. Terrific effort by them and very well deserved after the dominant season they have had.”

« 2019 Premiership Winners: Scone Thoroughbreds
Weather in the Week Ahead »