scone.com.au
MENUMENU
InstagramTwitterFacebook
Just In > Why Scone is leading the way with vaccinations

Why Scone is leading the way with vaccinations

Filed in Just In by Elizabeth Flaherty September 15, 2021

AT a 76.3 percent vaccination rate, the Upper Hunter Shire area is above the regional average of 73.7 percent and on track to be protected when restrictions lift and the virus spreads.

The extraordinary achievement is due to the quick and early action of staff at the Scone Medical Practice (SMP) securing vaccines as soon as they were available.

Because SMP had already run successful flu vaccine clinics for a number of years, the public health network was confident the Practice had the proper systems to use all the vaccines they were given and they were prioritised.

Since then the staff have administered more than 5,500 vaccines, run day clinics, night clinics and weekend clinics. On weekends alone they are now administering 450 vaccinations. 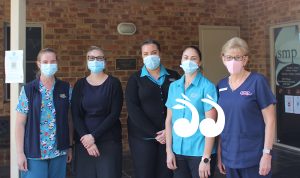 Dr Tammy Kimpton said she was extremely proud of the hard work all staff had put in over many months, “especially the receptionists, they really have had to put up with a lot.”

The Federal Government provides vaccines to general practitioners and the government specifies who each batch can be administered to, a restriction which can be frustrating for staff and patients alike.

Dr Kimpton said while Pfizer is more difficult to access AstraZeneca is readily available and at this stage it is critical people don’t wait.

“You just need to get whatever vaccine you can get in your arm,” said Dr Kimpton.

“Both chemists and us are offering AstraZeneca with no wait for us and I think the chemists are fitting people in within the week,” she said.

“AstraZeneca is a good vaccine and it’s safe, so I recommend people get it,” she said.

To date the Practice has only had one patient who was unable to have AstraZeneca for safety reasons, Dr Kimpton explained it is only contraindicated for very rare conditions.

“It’s a very specific set of things that would prevent you from having AstraZeneca, it’s a allergic reaction to one of the ingredients, a heparin induced thrombocytopenia and a central venous sinus thrombosis, so it really is a very rare thing that most of the population don’t have,” Dr Kimpton explained.

“So even if you’ve had a previous clot, it’s a completely different mechanism, so not something people need to worry about,” she said.

“Everyone over the age of 60 who is having the Pfizer (who can take AstraZeneca) is essentially taking it away from someone who is younger, who may not have the choice, and putting them further down the waiting list,” she said.

“For people under 18 it has to be Pfizer and Moderna when they start to roll that out through the pharmacies,” Dr Tammy Kimpton said.

Mayor Maurice Collison has made a $200 wager with Mayors from Dungog, Liverpool Plains, Mid Coast, Muswellbrook and Singleton, that the Upper Hunter Shire will reach 70 percent double dose first, with the money to go to a designated charity in the winning Shire.

“Like all communities out there, the Upper Hunter Shire is suffering. The only way we can end lockdowns and to open up our beautiful region is to have a high vaccination rate,” said Mayor Collison.

“…the point of this challenge isn’t to win but rather to use our platforms to motivate our communities to go out there and get vaccinated,” he said.

“To those in the Upper Hunter, tell your friends, your family, your neighbours to go out there and get jabbed!” said Mayor Maurice Collison.