It has been a huge week of golf for the ladies of Scone Golf Club with players contesting the Australian Senior Championship, the Country Cup, Club Medal round and the Hunter River District Champions Playoff at Scone.

Julie Leckie and Lyn Banks ventured to Nelson Bay to play two stroke rounds on October 21 and 22 in the Australian Ladies Senior Championship. In a field of 130, Julie had a great first round of 86 to set her up and after the second round she had qualified for the match play section for the top 8 in her age group. Playing off a handicap of 16, Julie was narrowly beaten on the 18th hole by a 9 marker from Perth in the scratch match play. Julie also finished 3rd in the overall net and both Scone players finished in the top 50 after their two rounds. 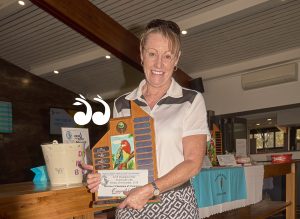 Meanwhile, on Monday October 21, Jodie Hinde, Annie Woods and Kerry McLennan represented the Scone club and Hunter River District in the Country Cup 4BBB Stableford against Newcastle District. The event was played at Kurri Golf Course and on the aggregate of scores Hunter River won by 25 points. Jodie paired with Annie and had 40 points, and Kerry paired with Kerrie O’Connell from Branxton and had 39 points.

On Tuesday the regulars played 9 holes at Scone. It involves a walk and talk, golf, some assistance for newcomers and sometimes a coffee post round.

On Thursday, October 24, a small field contested the final medal round for the season. In windy conditions Lyn Banks had 75 nett to win her 3rd Monthly Medal and Melanie’s Jewellers Trophy for the season. Wendy Clift won a ball and the “Wine O’Clock” putting, and Dordie Bragg won the NTP on the 8th. The Medal of Medal qualifiers are now finalised and will play off on Thursday October 31 for the Melanie’s Jewellers Trophy. Jo Brown, Julie Leckie, Jodie Hinde and Lyn Banks will play an 18 Hole Stroke round to determine the winner. The rest of the field will play an 18 Hole Stableford round and it will be the Lyn Banks Trophy.

It was a horridly windy day which got progressively worse, and this made golf very difficult. Kerry McLennan was in the Division 2 Champions section and in the GNSW Medal Division 1 section. In a great day out, she managed to win both with her round of 94 to win by 5 shots in the champions section. Her 73 nett won the Division 1 Medal and has allowed Kerry to progress to the state playoff at Stonecutters Ridge in Sydney on December 11. Well done Kerry.

In the Champion of Champions, Lyn Banks was beaten in a sudden death playoff by Dale Hamilton from Hunter Valley after they both finished on 86 after their 18 holes. Jodie Hinde played in the daily event and her 75 nett won her a prize for 2nd whilst Lyn’s 75 nett had her finish 4th and win a prize also.