On Thursday, August 8 the Scone lady golfers hosted an invitation day for the Dordie Bragg Trophy. Twenty visitors joined with the locals to play an 18 Hole Irish Stableford team event with the best two scores to count on each hole. A shotgun start meant all could finish together and enjoy lunch after the event. Feedback from the visitors, who were mostly playing the course for the first time, was that it was great to play and an enjoyable day was had by all. The only negative was the howling wind which made it more difficult to play as the day progressed!

88 points was needed to be the winner and this was achieved by Kerry McLennan, Narelle Rutter, Sharon Constable Maitland GC and Royalie Sciani Maitland GC. 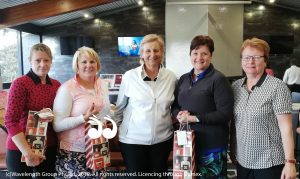 Julie Leckie is to be commended for her coordination of the event. A huge thank you is extended to the many ladies who helped the day run so well, and also to Dordie Bragg for her generosity.

On Wednesday, August 7, four ladies travelled to Singleton for their Open Day. In a field of sixty players Julie Leckie came away with a major prize after having the best visitor score of 71 nett. Her score would also have won the Division 1 nett or stableford, but one prize only is allowed. Lyn Banks was runner up in the scratch having 87, one shot behind Kim Robinson from Muswellbrook. Judy Carmody won a ball.

In a new innovation the ladies are contesting a knockout Putting Championship on the practice facility. A few games were played last Tuesday and a few more are scheduled for this Tuesday. The beginners clinic and 9 hole social game is being held each Tuesday, meet at 9am. On Tuesday, August 13, short game practice will be the focus while the Upper Hunter Vets Association players use the course to play the second round of their championships with a semi – shotgun start from 8.30am.

On Saturday, August 10, an 18 Hole Stableford was played for a Club Trophy. It was an appalling day to try and play golf with extreme wind and cold making it very difficult. Fifteen golfers braved the conditions and completed their rounds, a large number didn’t venture out at all and another six decided the clubhouse was more attractive mid round when rain and sleet set in! The winner was Tony Pringle who had a very good 38 points in the conditions. Tony also won the NTP on the 4th / 13th at 3.5 metres. No-one was able to get on the green on the 8th /17th.

Next Saturday, August 17, the event is an 18 Hole Individual and 2B Stableford for the O’Donnell Family Trophy. Hopefully better weather will allow the normal good field to enjoy the course.

Male players are advised that the Hunter River District championships will be held at Muswellbrook in A, B and C grades on Sunday August 25. The entry sheets are on the noticeboard. The Kevan’s Knockout matches are also required to be played by August 31.

All golfers are reminded that they can collect a free Inside Golf magazine each month from Scone Sporties Club and keep up with golf around the country, the latest playing tips and equipment availability. This month features an article on the new Scone Golf Course.

Don’t forget that new local rules came into play on August 7. Please ensure you check them before you play your next round. To help care for the course all players are requested not to take pull buggies or carts into the rough to stop the spread of unwanted weeds to other areas of the course. 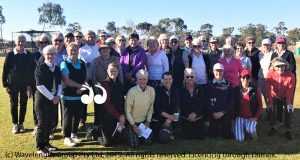 Golfers at the Invitation Day in Scone. Photo: Lyn Banks.

« Weather: The Week Ahead
Gallery: Animals in the Snow »