EVEN the Queen was surprised a team from Scone who entered the tournament for the first time walked away with the Cup.

“She said, ‘which Scone?’ And I told her the little town in Australia,” said David Paradice.

“She said, ‘you know this Cup has been going for years and nobody has won it the first time’,” he said.

“When I told her ‘the Cup is going back there, to Scone, can you believe it!’ she laughed,” he said.

“English people keep saying to us ‘I don’t think you have any idea how big this is’ and comparing us to the Jamaican bobsled team,” laughed David. 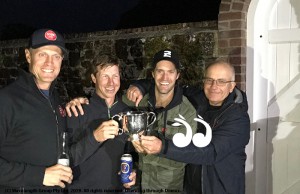 David said it was the first time the four players, James Harper, James Beim and Nicolas Pieres, had played as a team and since they all have connections to Ellerston and Scone it was also a sentimental win.

“That’s the funny thing, some of these teams have played together for years and years,” David laughed heartily.

“It really is very funny!” he said.

“Harper was asked to play for a few teams for a lot more money, but he wanted to do it with us and when we lost the first two games, we though what have we done?

“Nico is the youngest of three champion polo players and he has never really won anything big, he is usually overshadowed by his older brothers, they are a really nice family and it was great for him too,” he said.

“Ros Packer was there and she was really pleased we had a win,” he said.

“Someone said it’s been a really invigorating thing for many people, because so many people think it is out of their reach and then they see a team like us has gone and done this,” said David.

After the game the players and supporters celebrated in a typically Australian way, by going back to David’s for a BBQ.

“We’re just a bunch of guys who respect each other, want to do the right thing and have a good time playing polo,” said David.

The four Scone Polo players will be playing in the Gold Cup in two weeks time, but David cautioned not to expect big things, “we were just lucky, very lucky!”