Filed in Just In by Elizabeth Flaherty September 8, 2021

TWO men will appear in Scone court next month on offences relating to illegal hunting and firearms and a third man was fined.

On April 12 police investigated the illegal hunting of a red deer stag on rural properties in Kars Springs near Scone.

Later that month police issued a search warrant on a property at Merriwa where they located and seized two unregistered .22 rifles, an amount of ammunition, gun powder, cannabis and a GPS device.

In August police issued a 23 year old man from Muswellbrook with a fine for enter private land to hunt animal without owner’s consent and issued a court attendance notice to a 25 year old Tamworth man on the charge of give firearm to person not authorised by licence/permit and handle (supply) explosive/precursor without authorising licence. The Tamworth man’s firearms licence was suspended. 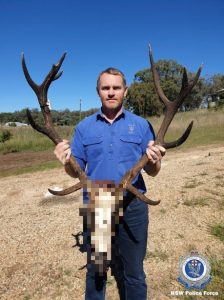 An officer holding a deer head – we’ve no i-deer why the head is pixelated. 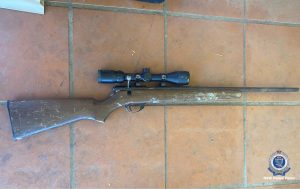 Firearms seized by police during their investigation. 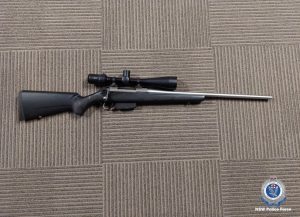