PAULINE Hanson is in Singleton to campaign for One Nation’s Upper Hunter candidate Dale McNamara to help the party secure a voice in the NSW lower house.

Ms Hanson who was in the Upper Hunter last weekend and this weekend to support Mr McNamara said it had been a great response from the public and was seen talking to voters at the pre-polling booth in Singleton.

“I think people want a change from the major political parties, they’re sick of the same old rhetoric they’re getting. Nothing is happening,” Ms Hanson said.

“Since One Nation has been on the scene, Mark Latham and the Upper House in NSW, we put pressure on the major political parties. They can’t just do whatever they want to do, railroad the people,” she said.

“We’re bringing the issues to them and giving people a voice and we’ll do the same with Dale McNamara.

“He’s local, he’s grown up here, he’s got businesses here and agricultural interests, he understands the agriculture side of things, he understands what the community wants. He has grandchildren in this area he wants a good future for.

“I think what’s most important on peoples’ minds is the cost of living plus job security.

“Some of the candidates want to do away with jobs in this electorate by doing away with coal mining. Until technology changes so that we can then convert to renewables if it services our needs and keeps electricity prices down.”

One Nation’s NSW Leader Mark Latham was also in Singleton to support Dale McNamara and thank him for an effective campaign.

“Dale is a great Australian success story, a self-made man who has been very successful in the business sector, born and bred in Singleton and is a real doer, that’s the important thing, to have a doer in this electorate given the long period of neglect.

“Our One Nation campaign has been fighting for coal jobs, coal jobs and more coal jobs. We see a very bright future for the coal industry. If government and green activists would get out of the way and allow companies to invest and create employment, prosperity and provide a good economic future for the young people of this district in particular.

“The mining royalties that have been raised in this seat from Singleton and Muswellbrook, 1.1 billion haven’t come back into the electorate in decent proportions. So all of that funding deficit should be used and Dale would be using his balance of power in the Lower House to achieve those things for the benefit of the people in this district. 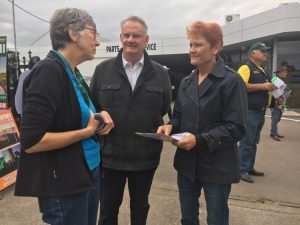 “We put our record out there, you can tell a lot by how people vote in the parliamentary forum and just six months ago, there was a litmus test on attitudes to the future of coal when One Nation voted mostly for coal-fired power and the National Party, Labor, the Greens voted for 100% renewables and against coal.

“Our record is strong, the policies we’ve put out have set the agenda and we think we have a really good chance of getting the support of people of the Upper Hunter with our outstanding candidate Dale McNamara.

A proponent of new coal-fired power stations, Dale McNamara, said for 40 years, royalties money is going down to Sydney that the Upper Hunter doesn’t see.

“They’ve got state of the Upper Hunter, we have girls changing in their cars because they don’t have the proper change room facilities. The Nationals need to hold their heads low because our kids have been missing out and that’s not happening in Sydney,” he said.

“We need to stop the invasion of our agricultural land by poor planning. We have people in Sydney making decisions and talking to our agricultural people and with some people that live on a hill or ridge, they’ll put wind turbines on them and then people of the Upper Hunter have to live with it.”

« Nationals scour for votes on the eve of by-election
By-election: Almost over… »