Filed in Just In by Elizabeth Flaherty September 10, 2021

DAVID Layzell, Upper Hunter Member of Parliament wondered yesterday if the Merriwa pop-up clinic would get through the 1,000 Pfizer vaccines he had secured, but by 10:30 this morning when the clinic opened there were already more than 500 people lined up around the block. 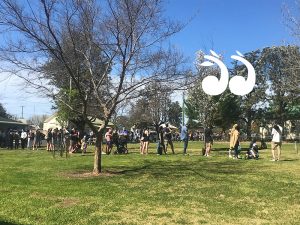 More than 500 people were lined up around the block at 10:30 this morning when the clinic opened.

People were prepared to stand for hours in the sun, seeking a bit of shade where they could to get their first covid vaccination. The demographic was fairly young, with plenty of school children keen to get back to school and their part-time jobs.

There were plenty of volunteers outside doing head counts, handing out paperwork, complementary pens and bottles of water, while inside more than 14 staff were giving the vaccinations and ensuring the paperwork was processed.

The line while incredibly long, kept a constant pace, enough time to get settled and it would be time to inch along a bit further.

Annie Inder helped coordinate the local volunteers, liaised with the Royal Flying Doctor Service (RFDS) and was also giving vaccinations. Ms Inder said she was glad to see so many people want to get the vaccine and was surprised by the number of people willing to line up early to get a spot. 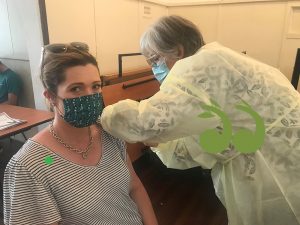 Annie Inder vaccinating Jodie Harrison. Jodie took her high school children to get their vaccination and also got hers at the same time.

Jessica Tilden is usually a dental assistant, but came across from the RFDS base in Dubbo to help deliver the vaccines.

“We all jumped in cars at 7:30 this morning to come over and when we arrived we couldn’t believe the number of people already here,” said Ms Tilden.

It was 2pm and Jessica said, “we’ve already had about 630 people through.”

“Everyone has been fantastic and the local bakery donated lunch for us, it’s nice to see how much the community values the opportunity,” she said.

The pop-up clinic will be back in another three weeks to administer the second dose of the vaccine. Only people who were vaccinated today, will be able to receive the doses in three weeks and Jessica said they would be working out a system to ensure people did not have to line up all day.

“Between now and then we will work out a system, maybe once we look through the numbers we have say people whose surnames start with A to D at a set time and so on, that way people won’t need to line up for as long,” she said.

David Layzell, popped across to the pop-up and was amazed to see how many people were willing to join the lengthy line. 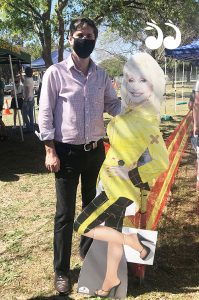 David Layzell said the community spirit in support of the hub was fantastic and even Dolly made a special appearance.

“The commitment of people to get the vaccine couldn’t be clearer and we will keep working for more opportunities like this,” said Mr Layzell MP.

“All of the volunteers here are doing an amazing job in bringing this all together and of course Dolly has made an appearance,” he laughed.

“Robert Smith, the local pharmacist has been doing a great job here in the local community getting vaccines out and Dolly is a regular feature there, so today she has appeared here too,” he said.

“It’s great to see so many people getting vaccinated and we’ll keep working to get more vaccines,” David Layzell said.