scone.com.au
MENUMENU
InstagramTwitterFacebook
Just In > Nats and Union stoush over mine workers

Nats and Union stoush over mine workers

WHILE mine workers celebrated the proposal from Labor’s Jeff Drayton to stop the casualisation of their workforce, the National Party and One Nation were cynical. (Read: Labor backs Jeff’s bill for mine workers.)

Peter Jordan, president of the Construction, Forestry, Mining and Energy Union (CFMEU) Northern Mining and NSW Energy District, said the announcement was a clear statement NSW Labor are fully behind the coal miners, our Union and Jeff Drayton.

Clare Bailey, was a permanent trainee for two years and was then moved to a casual position, she has worked in mining for ten years and said it is demoralising being a casual worker.

“It’s heartbreaking and demoralising to be working alongside people operating the same machinery day in day out, night after night, week after week and get paid up to $60,000 plus, less than someone else,” she said.

“When the weather was bad, we were sent home, so then we weren’t paid for those shifts and everyone has bills to pay,” she said.

“It’s not the workers, everyone else is on your side and they also think you should have a permanent job, but how long do you wait? You can wait five years and still not get a permanent job,” Clare Bailey explained. 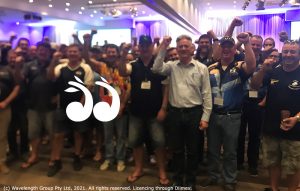 John Barilaro, Leader of the National Party said Labor’s announcement to move to more permanent roles was a drive for Union recruitment.

“This is typical of Labor, looking after their union mates. Yesterday they were doing the bidding of the Teachers’ union on TAFE, and today the Labor candidate and CFMEU member has gone into bat for his own union,” he said.

“Many contract staff do not join unions, and Labor is trying to impose a handbrake on mining employers in a blatant recruitment drive for the unions. This knee-jerk reaction from Labor could end up costing NSW thousands of jobs,” said Mr Barilaro.

Peter Jordan, said Mr Barilaro’s comments were nonsensical explaining members and Union had no concern about the new legislation resulting in job losses and it would increase job certainty.

“First of all there are many, many contractors in the coal industry who are members of this Union as there are many permanents, also, staff members,” said Mr Jordan.

“The fact of the matter is these workers all deserve to be paid the same, the issues around health and safety and penalise safety if they injure and kill people in the workplace, is that going to stop jobs?”

“I think the Nationals and One Nation are very concerned about Jeff as a candidate, because he is a true representative of this electorate, not only coal miners…Jeff’s worked in the vineyards in his early days, in Energy Australia, he owns a farm, he’s a grassroots person in the electorate” said Mr Jordan.

Dale McNamara candidate for One Nation said only his party and the Nationals supported miners.

“Only One Nation voted 60 times in favour of coal and the tens of thousands of jobs it provides in the Upper Hunter,” he said.

“This is a matter of fact and on the public record. Only One Nation stands for the miners and securing their future employment,” said Dale McNamara.

Peter Jordan, said members were disgusted when One Nation voted with the Nationals against permanent jobs and it was the reason their previous candidate left the party.

“Look at their last candidate (Stuart Bonds) for the Upper Hunter, he was supporting casual workers and what have the done?

“So there ‘s the message to anyone who thinks One Nation is the party for workers, it’s bullshit,” he said.

“They’re not a party for workers, they’re a party for business owners,” said Peter Jordan.

Peter Jordan said the National’s candidate, David Layzell in admitting he didn’t know there was a casualisation issue for mine workers, showed he didn’t represent mine workers either, just mine owners. (Read: Where candidates stand on Labor workers plan)

“Layzell…no one’s ever heard of him and he’s been under a log I think because he’s never heard there is an issue with casualisation in the mining industry…I think they picked the wrong candidate,” said Mr Jordan.

“Coal miners are bitterly disappointed with both One Nation and the Nationals for not supporting mine workers,” Peter Jordan said.