Filed in Just In by Elizabeth Flaherty August 19, 2021

THE construction of the Scone Airport war bird museum has ground to a halt, with props on the steel frame to reinforce it after the roof structure began to bow.

Last Friday, scone.com.au asked Mayor Maurice Collison why the props were in place and why the steel of the frame had bowed?

“After construction of the lattice beam across the large hangar door, a greater than expected sag was evident in the lattice beam. As you can imagine, in order to allow aircraft movements in and out of the building a very wide opening is required, which has with it some engineering challenges. The building contractor immediately raised this issue with the hangar designer. The designer then reviewed the design and recommended some strengthening work to the columns either side of the hangar door. The red props were installed to support the lattice beam while this rectification work takes place. They will be removed when this work is finished. There is no cost implication, all works are at the contractor’s cost. Impacts to the finish date are not known but the contractor is required to still meet the contracted deadline.”

However, more speculation about the quality of the steel used in the project and issues with loading bearing continued to circulate in the community.

Since the project is part-funded by state and federal government, David Layzell, Member for Upper Hunter was contacted and with a background in construction got to the bottom of what has occurred and what is being done about it.

“NSW Public Works are across the project and I’ve been advised Northrop Engineering are now conducting a separate engineer peer review into the design and construction,” said Mr Layzell.

“Sheets for the roofing were placed on the frame, which created a load bearing issue and caused the frame to bend,” he said.

“The builder of the museum had used a subcontracted construction engineer to review the designs before the build, however they have now engaged North Rock to thoroughly examine the design and construction plans,” he said.

“They estimate there will be an eight week delay on construction, but all costs will be worn by the building contractor, not the local Council.

“Errors are not uncommon in design and construction, but it is being thoroughly reviewed by another party to ensure the specifications are right, so that the correct measures are taken for the issue to be rectified and for the rest of the build to be up to the expected standards,” he said.

“I’ve also been assured the builder is covering the costs associated with the issue and ratepayers will not,” David Layzell said. 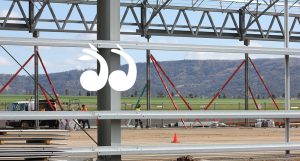 Red props in place to support the structure of the museum. 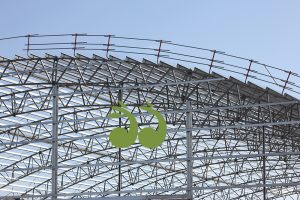 « Sewerage testing: the results are in
Covid: Lock down timeframes for Sydney and regional »