Mark of the Scottish Unveiled

THE Scottish left an indelible mark on the Upper Hunter, with many of the earliest white settlers naming townships and properties in honour of their birthplace and on Saturday the organisers of the Aberdeen Highland Games officially unveiled a cairn to commemorate the Scottish connection.

The cairn was built in Taylor Park, in time for this year’s Highland Games in July, but with all of the caber tossing, kilt flying dancing and eating of haggis, the official opening was deferred for a quieter moment.

According to Charles Cooke, president of the Aberdeen Highland Games, cairns were built in Scotland as people returning home placed a stone as a memorial and organisers thought it was the perfect monument for Aberdeen and the Upper Hunter.

The cairn was unveiled by Nicola O’Driscoll (nee Macintrye) the Chieftain for this year’s Aberdeen Highland Games, with the new Upper Hunter tartan making the perfect veil.

“We had a great roll up of people and following the unveiling we had a reception at the Segenhoe Inn and everyone mingled for a while,” said Mr Cooke.

“More kilts are being made, so there are eight kilts that we are aware of; a lot of the smaller items the ties and scarves are going very well,” Charles Cooke said. 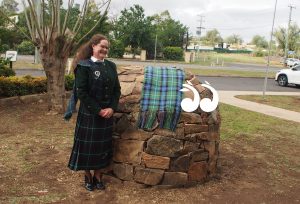 Nicola O’Driscoll (nee Macintyre), Chieftain of the 2019 Aberdeen Highland Games did the honour of unveiling the cairn. 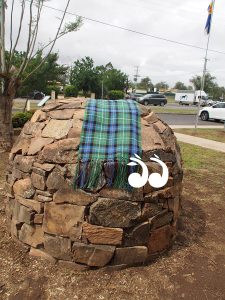 What better veil to unviel the Cairn, than the new Upper Hunter tartan? 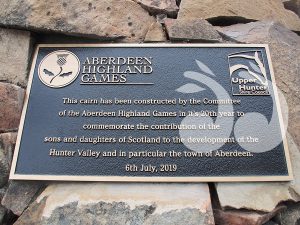 The plaque commemortaing the opening of the cairn in Taylor Park, Aberdeen. 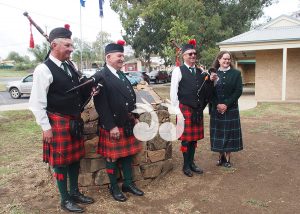 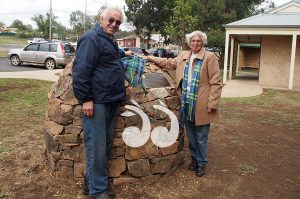 Fred and Marie Lawson., who were initially waeved the new Upper Hunter Tartan.