WHETHER he’s helping out elderly customers with their prescriptions or handing out bandaids for babies, Rob ‘The Go Getter’ Smith is as kind and caring as they come.

Rob is the ultimate community pharmacist and the latest person to join the Merriwa Wellbeing Superspreader Team.

His commitment to his Merriwa community is second to none. 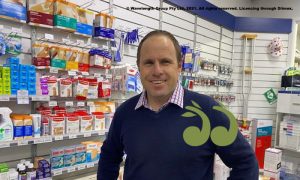 Rob “The Go Getter” Smith is gearing up to join nine other Wellbeing Superspreaders and help the Where There’s A Will foundation infect Merriwa with positive wellbeing. Photo supplied by WTAW.

Rob was one of the driving forces behind the Why Leave Town Gift Cards, which generated much needed funds for local businesses during the drought.

He is an avid cyclist and the co-organiser/founder of the Tour De Merriwa, an event fast becoming a ‘must do’ on the regional cycling calendar.

An outdoors man, Rob loves nothing better than a hike in the hills, kayak on the river or swim laps in the pool during summer.

Rob’s latest adventure involves him gearing up to infect Merriwa with positive wellbeing.

Along with nine other Merriwa Superspreaders, Rob will be trained by a certified Wellbeing Coach for three months, identify his wellbeing goals and be given actions and skills to achieve them.

He and the other Superspreaders will also recruit friends and family to join them for training in Mental Health First Aid, so they know the signs and symptoms of mental ill health and how to help those in need.