A BRAVE school student has changed the New South Wales Government’s approach to mental health policy, by sharing a personal story about her dad’s depression.

St Joseph’s High School Captain, Meg Southcombe, captured the attention of the Governor of New South Wales, Her Excellency Margaret Beazley, with a case study she wrote about mental health impacts on family wellbeing for her Year 12 Independent Research Project. 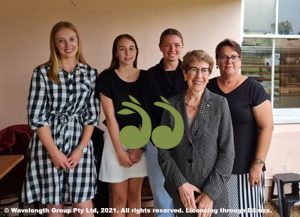 Meg Southcombe (third from the left) standing next to the NSW Governor, Her Excellency Margaret Beazley at the Gundy Pub. Photo supplied.

Meg had the rare opportunity to meet with the Governor during her recent tour of the Upper Hunter, where she shared her unique insight into the challenges of dealing with mental ill health in rural and remote areas.

It was at this meeting, the Governor asked for a copy of Meg’s research project, which has now been entered into the New South Wales Government House database and will be referred to when making future policy decisions.

“I trekked out to Gundy Pub on a miserable day and we just got talking. I thought ‘this is it, this is my opportunity, so I told the Governor that my dad had depression, he was that ill that he was put in a psych ward in Newcastle, that for a while my mum was trying to work 10 hour shifts, look after two kids, driving us an hour and half to and from Newcastle to see dad and for our sport,” Ms Southcombe said.

“There was no initiative to go there and talk to her about it, it was just the right place at the right time. I told her that this is what happens in the Upper Hunter because we don’t have access to services. I tried to explain what it’s like in rural and remote areas for families like ours,” she said.

“After telling her all this she asked me to send her my research project so she could use it to help shape policy when it comes to mental health in rural and remote areas,” she said.

“I got her email address and sent it off without really expecting too much. Then I got a call to say that it had made its way to the Governor’s secretary . . . 100 people have read it to get it to that stage. 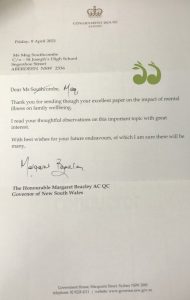 Meg Southcombe received a personal letter from the NSW Governor, after she read her Independent Research Project. Photo supplied.

“Then I got a letter directly from the Governor saying she’d read my ‘excellent’ paper with great interest. It said thank you for letting me read your report, we’ve read it carefully and we’ll be using in the future when making decisions,” she said.

“It’s just awesome to know that our family’s story has been read by someone at that level and we celebrated at home knowing that we’re helping to shine a light on what the experience is like when you’re from a rural area,” said Ms Southcombe.

Meg’s project, 61 pages in total, makes for some harrowing reading.  It details how her younger brother Wil would stay home from school to look after and support their father to ensure he didn’t self-harm, the eventual diagnosis of depression, his hospitalisation, the recovery and the strain and stress on the family throughout the ordeal.

Meg describes the ‘Green family’ as a ‘case study,’ in the project, never disclosing that the family is actually her own.

Meg, her mother Sarah, father Michael and 15 year old brother Wil from Muswellbrook are now happy to unveil themselves as the fictional Green family in the hope that their story will assist others and to highlight the role the Upper Hunter community and the Where There’s A Will Foundation played in helping their situation.

“In 2018 I was in Year 9 and towards the end dad got really sick. We knew stuff was going on, my brother had been staying home from school and looking after him – things were so severe that we didn’t want him left alone. It got to the point where we had the whole family sitting down in the kitchen and mum and dad told us what was going on.  It was depression,” Ms Southcombe said.

“I never ever thought my family would be impacted by mental illness. I had great friends; everything was going right. Mum and dad both had jobs in mining.  We were an active and healthy family and on the outside, it probably seemed like I had a perfect life,” she said.

“But it just wasn’t like that. My grandmother (dad’s mum) had gone through a near death experience and then dad lost his best mate to suicide.  Those traumatic experiences tipped him into depression. I remember him saying how he would just look at the roof and all those images would come back to him,” he said.

“He ended up going into a psych ward near Newcastle for a few weeks, so every time I wanted to see my dad, we had to drive an hour and half each way.”

Life didn’t get much easier when her father returned home. There were night terrors, panic attacks and the constant struggle for motivation to get out of bed, eat, go to work or exercise.

Meg’s report details the financial and emotional burden this placed on her mother who was rising at 5am and getting home at 10pm to meet work and family commitments. It also meant a social life was non-existent for Meg.

Worry was relentless and most of the family’s suffering was done in silence.

“No-one at school knew what was going on. When I was in Year 9 I didn’t want people thinking I was attention seeking, that I was crying out for help or that I wasn’t capable.  I didn’t want people to think that I couldn’t handle anything, I wanted responsibilities at school. My neighbours and grandparents knew, so I did have an outlet,” Ms Southcombe said.

“I got to Year 12 and aside from my two best mates, no-one at school knew what had been going on, but dad’s okay now and we want to shine a light on mental illness,” she said. 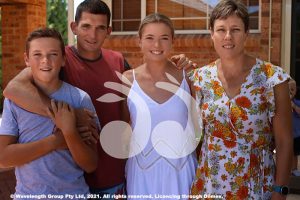 The close-knit Southcombe family who were brave enough to share their story to help and provide hope to other Upper Hunter families going through the same thing. (L-R) Wil, Michael, Meg and Sarah. Photo supplied.

“We didn’t realise how much publicity the project would get; we were so certain we were keeping it confidential. At the backend, when it started getting a bit of attention, I had a conversation with dad saying we should tell people the Green Family is us,” she said.

“He ummed and ahhed about it and after a bit of talking and convincing, we decided to do it, because when you show people that sometimes the families that seem like they have it all together really don’t and that’s okay. There’s so many families going through that in the Upper Hunter and they just put it aside like we did for so long,” said Ms Southcombe.

Meg was inspired to write her school project on mental health impacts after receiving years of support from the Where There’s A Will Foundation (WTAW).

“The reason I wrote it was because Where There’s A Will does such a great job,” Ms Southcombe said.

“When you’ve got the tough footy boys wearing those rainbow WTAW socks, when you see the logo on bucket lines at the mines and out in the workforce it tells you that even on those crappy days that we all have that it’s ok, that there’ll be someone to talk to.  It tells you that people here in the Upper Hunter care and that they’ve been educated about mental health. It tells you that it’s ok to talk about this stuff, that it’s a safe space,” she said.

“I love WTAW and the work that they do, they helped me get through, when I thought that as a family, we weren’t going to make it.  My brother said we are so lucky to come out of this the other side; we haven’t lost dad and we’re such a close family because of the experience,” she said.

“It’s still very raw, it was something that only happened two years ago, but the research project is factual. I interviewed our family doctor, my mother, my brother, it’s all fact and I guess that’s what made it an important read.

“And now we’re sharing our story and we want others to know that if something’s going on they can reach out.  If anything’s ever wrong, just talk to someone.  It could happen to dad again, we don’t know, but we do know we’ve got a strong community around us, something WTAW has developed, and it means I feel safe to talk about our experience,” Ms Southcombe said.