TODAY, on the doorstep of Mt Arthur, Labor candidate Jeff Drayton, laid down a five point plan to be incorporated into planning legislation to protect coal workers.

Labor propose when a mine applies for any modifications to planning they must also comply with the following conditions for approval:

“I’m very proud of the fact that I’ve got the support of Jodi and the party in regards to the bill and certainly I’ll make it my first job if I get elected into Parliament, to introduce the bill into Parliament,” said Mr Drayton.

Mr Drayton said the increasing casualisation of workforces was tough on local families and the legislation would ensure they had the job certainty they deserved and a safer workplace.

At Mt Arthur more than 40 percent of the workforce is casual, whereas other mines such as Mangoola only had a small proportion of casual workforce.

“I deal with these workers all the time and I’m sure they’d be thrilled to hear, if I do get elected and we can get this get – they will no longer have to worry about turning up to work and finding out that it is rained or it’s still too wet and they get sent home, because that is what happens,” he said.

“A number of studies that say casualisation of a workforce does in fact affect safety, purely with a bit of ownership around the job and knowing you are going to be back at the same job the next day,

“The influence it would have on a mining boss, to know that if he doesn’t do the right thing and if someone does get killed on their site that they can be gaoled, certainly we hope it will change mining boss’ attitude towards safety…attitude does need to change because there are still people being injured and dying on mine sites,

The legislation was described by Jodi McKay, Leader of the Labor Party as putting workers front and centre and said Jeff was the person to lead the workforce of the Upper Hunter through the challenging times ahead.

“He has 100 percent support of the Party and he always said that he would stand up for the workers of the Upper Hunter and that is exactly what he is doing,” said Ms McKay.

“The issues up here are so challenging and complex and no one understands those issues better than Jeff Drayton, he has lived this,” she said.

“He is changing the Labor party and in a good way! 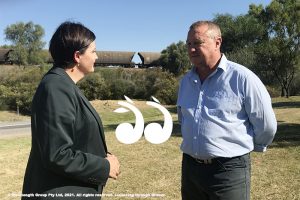 “I am a Hunter girl and I can think of no better person to represent the Upper Hunter, this wonderful region, which includes my hometown than Jeff Drayton,”she said.

“We’ve got a change in our energy mix…we’ve got jobs that need to be protected in the coal industry and in export, but we need to have someone that can also work to create new jobs, now where those jobs will be will depend on the leadership in this region,” she said.

« Paving the way for Positive Early Childhood Education
The end of an era: Murrurundi Vinnies closes »