Filed in Just In, Sports Just In by Elizabeth Flaherty March 16, 2020

The Steve Haylen-coached 16’s trailed 8-4 at halftime before what assistant coach Brad McManus described as “the wheels fell off” in the second half.

“The boys played well in the first half. And for 10 minutes of the second half but we just had too many dropped balls, too many mistakes, McManus said.

“That’s been pretty much the story of the season. They’ve played well in patches and there are some very good kids amongst them.”

Scone’s Jake Clydesdale had another strong game while Glen Innes lock Malakai Griffiths also impressed with a strong all round game. North Tamworth centre Joash Boney was another to play well, especially in defence.

The Tom Learoyd-Lahrs-coached 18’s trailed 6-nil early but tries to Jack Todd, Mark Simon and Dan Kelly handed the side an 18-6 halftime lead. 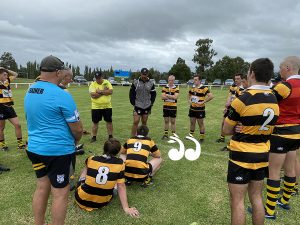 Tom Learoyd-Lahrs addressing the under 18’s team on Saturday at McKinnon Oval in Aberdeen.

When Kootingal fullback Brayden Reid dived over in the corner the Tigers led 24-6 only to fail to capitalise on good field position and allow the Eels to score two late tries.

It was a costly finish as the for and against points will decide the semi final positions.

Tom Learoyd-Lahrs was despondent after the game.

“Mathematically we can still make it,” he said.

“But we need Parramatta to beat the Titans next week.”

He rued some missed chances for his side to improve the side’s for and against for it is points scored for and against which will most likely determine the semi finallists.

“I believe one of the two sides we played the last two weeks will win it,” he said.

“We beat one and drew with the other. It’s a tough game sometimes you don’t get what you deserve.”

He believes the side “hasn’t hit their straps yet”.

It also had a heap of outstanding players who lifted against a much bigger side.

Singleton centre Jacob Sukanaivalu earned the game ball with an outstanding match in attack and defence.

Some of his tackles skewered Eels opponents.

Fellow centre Luke Smith (Denman) also had a big game, five-eighth Mitch Henderson probed constantly but the pack, to a man was fabulous.

Narrabri prop Kalab McMillan-Bassett was immense, his defensive effort superb. Fellow prop Jack Todd also led the way in attack and scored a crashing first try to set the Tigers on their path.

Lock Kobe Bone was another to star with a wholehearted display and the two hookers, Liam Ball and Blake Ginman, also excelled.

“They were all outstanding,” Tom Learoyd-Lahrs said.

“They all toiled hard, all turned up for each other in defence. Even when we were poor in completion in our completion rates. Our commitment was outstanding.”

That commitment was evident in their preparations for the Laurie Daley Cup too.

Learoyd-Lahrs complimented and thanked his players for their efforts in making all the training sessions, travelling long distances to play and train.